...while Braunschweig's PTB claims to have made “sharpest laser ever”. 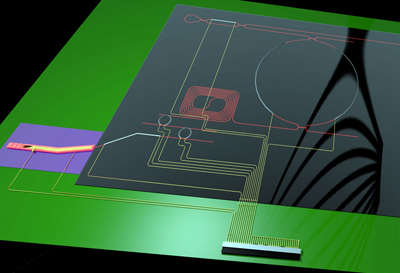 Researchers from the Netherlands’ University of Twente’s MESA+ research institute, working in collaboration with Lionix company, have developed what they are calling the world’s most narrowband diode laser on a chip.

The team says that the laser “represents a breakthrough in the fast-growing field of photonics, and will bring applications such as 5G internet and more accurate GPS closer”. Research leader Professor Klaus Boller presented the research results during the scientific congress in Munich during last week’s LASER World of Photonics 2017.

The new laser announcement, published this week, stated, “For photonic chips to function as efficiently as possible, it is necessary to properly control the light signals. This means that all the light particles being transmitted must have, as closely as possible, the same frequency.

“The University of Twente researchers have managed to develop a minuscule laser on a chip with a maximum bandwidth (the maximum uncertainty of frequency) of just 290 Hertz. By some distance, this is the most accurate laser on a chip that has ever been created,” added Prof Boller. “Our signal is more than ten times more coherent – or clean – than any other laser on a chip.”

The new laser is a tunable hybrid laser, which means that it essentially consists of two different photonic chips, that are optically connected to each other.

Prof Boller added, “It will bring countless applications within reach, such as controlling movable antennae on phone masts for 5G mobile internet, faster data flows through glass fiber networks, or more accurate GPS systems and sensors for monitoring the structural integrity of buildings and bridges.”

The research was carried out by Youwen Fan and Klaus Boller of the Laser Physics & Nonlinear Optics department at the University of Twente MESA+ research institute, Applied Nanophotonics, in collaboration with Ruud Oldenbeuving, Chris Roeloffzen, Marcel Hoekman, Dimitri Geskus, and René Heideman of the company LioniXInternational. 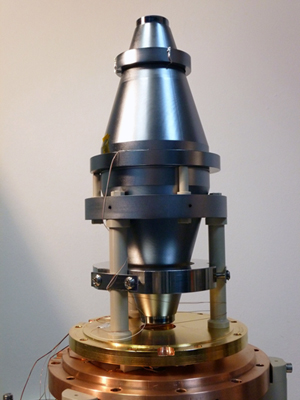 Twente is one of the world’s leading regions when it comes to photonics. The region is, for example, the birthplace of the TriPleX technology – a key standard for photonic chips. At the heart of Twente’s strong position is the deep expertise and strong chemistry between all stakeholders.

PTB claims to have made sharpest ever laser

Braunschweig’s Physikalisch-Technische Bundesanstalt creates a laser with a linewidth of only 10 mHz (pictured, left).

With a linewidth of only 10 mHz, the laser that researchers from the German research organisation PTB have developed together with US researchers from JILA, a joint institute of the National Institute of Standards and Technology (NIST) and the University of Colorado, Boulder, has established a new world record.

They say that such precision is useful for applications such as optical atomic clocks, precision spectroscopy, radio-astronomy and for testing the theory of relativity. The work has been published in Physical Review Letters.

"The smaller the linewidth of the laser, the more accurate the measurement of the atom's frequency in an optical clock. This new laser will enable us to decisively improve the quality of our clocks", commented PTB physicist Thomas Legero.

In addition to the new laser’s extremely small linewidth, Legero and his colleagues found out by means of measurements that the emitted laser light's frequency was more precise than what had ever been achieved before. Although the light wave oscillates approximately 200 trillion times per second, it only gets out of sync after 11 s. By then, the perfect wave train emitted has already attained a length of approx. 3.3 million km.