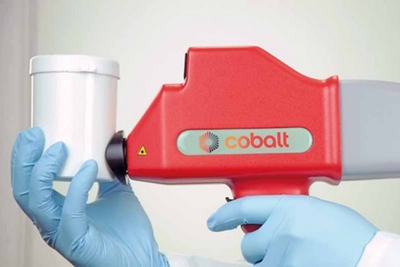 Founded in 2008 to exploit work by Science and Technology Facilities Council (STFC) senior fellow and CLF researcher Pavel Matousek, Cobalt has since developed equipment that is able to extract “molecular signature” Raman signals from materials inside opaque containers, as well as from tablets, capsules and powders.

That capability has seen Cobalt’s systems deployed at dozens of airport security screening points, while the company is beginning to make inroads into the pharmaceutical sector, where Agilent already has a huge presence.

Cobalt’s CEO Paul Loeffen is set to remain closely involved following the acquisition, and will become Agilent’s new director of Raman spectroscopy as the company establishes a global center for its Raman efforts at Cobalt’s headquarters on the Harwell campus near Oxford.

Advancing Raman
Cobalt’s equipment is based around techniques called spatially offset Raman spectroscopy (SORS) and transmission Raman spectroscopy (TRS). The SORS systems are able to identify liquids inside opaque plastic or glass containers, while TRS can be used for quantitative analysis of mixtures such as tablets, capsules and powders by eliminating surface effects that usually swamp Raman approaches.

Agilent said in its acquisition statement: “Cobalt’s customers include more than 20 of the largest 25 global pharmaceutical companies, and more than 75 airports across Europe and Asia-Pacific, including eight of the ten largest European airports, with over 500 devices deployed at airport checkpoints.”

Pharmaceutical analysis represents a potentially huge growth area. Cobalt’s customers in the sector already include the US Food & Drug Administration (FDA), whose pharmaceuticals division purchased a “TRS100” system from the firm last year.

The TRS technique is seen as a faster and less labor-intensive alternative to conventional high-performance liquid chromatography (HPLC) analysis, with pharma industry heavyweights GlaxoSmithKline, AstraZeneca, Actavis and others all reporting interest previously.

Deep analysis
Matousek pioneered the development of SORS after initially working on ways to reject fluorescence signals – traditionally the bane of all Raman spectroscopy efforts. He found that it was possible to use the spatial domain to reject fluorescence, instead of more conventional time-gating approaches that demand relatively high-power lasers to generate strong Raman signals.

With advances in diode lasers, holographic filters and detector electronics, it became possible to build a complete SORS instrument at a comparable size to a conventional ultraviolet or infrared spectrometer, and thanks to seed funding from STFC and others a spin-out company called “Litethru” emerged, later re-named Cobalt.

CEO Loeffen joined the startup in September 2009, having previously co-founded X-ray equipment company Oxford Diffraction before it was sold to Varian in 2008 for $48 million. Under his lead, Cobalt has won a number of accolades, including the prestigious Royal Academy of Engineering (RAE) MacRobert Award in 2014 for its airport scanners.

Back in 2011, Loeffen told optics.org: “The received wisdom has always been that, while Raman is very powerful, it is essentially a surface technique. So, depending on the material, you might only be able to look at the top few hundred microns or so. The significance of the CLF work was to make Raman applicable to much deeper analysis.”

In terms of practical applications, that could mean anything from identifying a liquid explosive inside a plastic bottle, to bone tissue beneath human skin.

For pharmaceuticals analysis, the TRS technique looks particularly relevant. It relies on a Raman signal making its way through a turbid and therefore highly light-scattering sample, perhaps as thick as a centimeter. The laser bounces around the sample, meaning that although the light source loses all of its directionality, a Raman signal is constantly being generated and spectral features representing the bulk average of the sample material – rather than just its surface – can be collected.

New HQ
Cobalt’s operations have expanded significantly since 2011, with the company now employing 52 people and recently committing to a ten-year lease on a new headquarters building at the Harwell Science and Innovation Campus that will serve as Agilent’s global center for Raman spectroscopy.

Ian Taylor, the Rainbow Seed Fund chairman, said in response to the £40 million deal: “The acquisition of Cobalt demonstrates our objective to leverage private capital to validate, invest and grow leading UK science. The successful sale of Cobalt gives Rainbow additional funds to re-invest in ideas emerging from the UK’s world-leading research base.”