Construction of what will become the world’s largest optical telescope now officially under way. 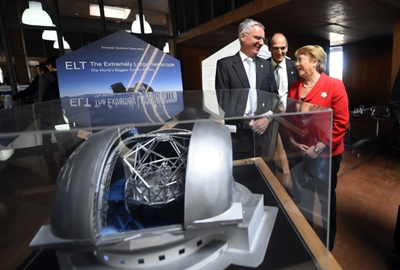 While ground works to level the 3000 meter altitude summit of Cerro Armazones began nearly three years ago, and some optics are already in production, the ceremony at ESO's Paranal Observatory in northern Chile marked the beginning of the construction of the dome and main ELT structure.

Once completed, the five-mirror setup will be world’s largest optical telescope, featuring a 39 meter segmented primary collector and a six-laser adaptive optics system to generate images sharper even than those delivered by the Hubble Space Telescope.

Symbolic start
In attendance alongside Bachelet and government ministers at the May 26 event were ESO director general Tim de Zeeuw, the ELT program manager Roberto Tamai, and Andreas Kaufer, director of the La Silla Paranal Observatory.

“With the symbolic start of this construction work, we are building more than a telescope here,” said Bachelet at the ceremony. “It is one of the greatest expressions of scientific and technological capabilities, and of the extraordinary potential of international cooperation.”

Patrick Roche, president of the ESO Council, added: “This is a milestone in ESO's history. The ELT will be the most powerful and ambitious telescope of its kind.”

One of the critical elements of the enormous optical components is the “Zerodur” material developed by German optics giant Schott, on which the giant mirror blanks are based. The lightweight glass-ceramic material even formed part of the “first stone” ceremony, with the cover of a time capsule prepared by ESO featuring an engraved Zerodur hexagon at a one fifth-scale to one of the ELT primary mirror’s 798 individual segments.

Inside the time capsule are a poster showing photographs of current ESO staff, plus a copy of a book describing the future scientific goals of the telescope. Among the priorities is direct imaging and spectroscopic analysis of exoplanets and their atmospheres – work that could reveal whether life has evolved elsewhere than Earth in the Milky Way galaxy.

Other teams will use the ground-breaking equipment to study the nature of dark energy and dark matter, observing the outer reaches of the universe to explore its origin and subsequent evolution.

Grid support
Thanking the Chilean president and her government for their support and use of Atacama mountain summits that represent some of the best Earth-bound locations to make astronomical observations, de Zeeuw said:

“The ELT will produce discoveries that we simply cannot imagine today, and it will surely inspire numerous people around the world to think about science, technology and our place in the universe. This will bring great benefit to the ESO Member States, to Chile, and to the rest of the world.”

The cost of its construction has been estimated at €1 billion, with first light currently pencilled in for 2024.

The new connection to the grid is expected to help reduce energy costs and provide a more reliable and stable source of power, with land around the mountain-top sited also cordoned off by the Chilean authorities to protect the telescope from any interference.

Those efforts are intended in part to cement the South American country’s status as the primary global center for hosting large astronomical telescopes. In contrast, problems with land licensing and the protection of sensitive sites has held up construction of the Thirty Meter Telescope on Mauna Kea in Hawaii, with Chile, Mexico and the Canary Islands emerging as potential alternative sites. 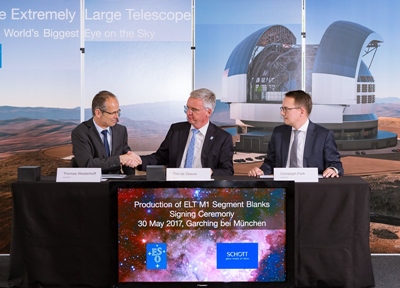 Each of the mirror's 798 individual hexagonal segments measures 1.4 meters across, and during the polishing process those segments will be polished to a flatness of around 10 nanometers.

In order to meet the challenge of delivering nearly 800 polished segments within seven years, Safran Reosc is setting up a dedicated new facility in Poitiers, where it will build to a peak production rate of one mirror per day.