by Ford Burkhart
Even though Tesla is using familiar old materials for its new solar roofing tiles, experts say the stars may be aligned for a possible strong entry into the marketplace.

The glass tiles, announced last week to something of a fanfare, are based around Panasonic’s ‘HIT’ panels. They’ll use a high-strength glass that Tesla says can withstand a heavy hail storm (see corporate video below).

Synergies
HIT stands for heterojunction with intrinsic thin-layer, and uses a combination of amorphous and crystalline material to deliver high conversion efficiency. The technology has been around since the 1990s, and was initially developed by Sanyo.

Robert Norwood, an expert in optics and photonics materials at the University of Arizona’s College of Optical Sciences, said companies had been trying to come up with a marketable solar shingle “for five to ten years.”

“It’s not an entirely new idea,” Norwood pointed out. “There have been similar offerings, but not as well engineered, and Tesla’s market presence is definitely a factor.”

So is the low cost of silicon, and the novel strategy. “It’s a combination of things,” Norwood said. “It’s all a unique situation, where the synergy between the potential solar business and [Tesla’s] car and battery business may help reduce prices. It’s about innovation and innovation is good.”

At the Massachusetts Institute of Technology (MIT), one materials science expert predicts that such solar roof tiles “will soon be dominant.” Kazumi Wada, a professor visiting from the University of Tokyo, said he admired the Tesla tiles’ appearance but cautioned that heat may be a problem, compared with the more familiar on-roof PV installations.

“The solar tiles will be less effective because of no wind cooling,” he said, pointing out that warmer cells could lead to lower power output, or cost more if active cooling is required. 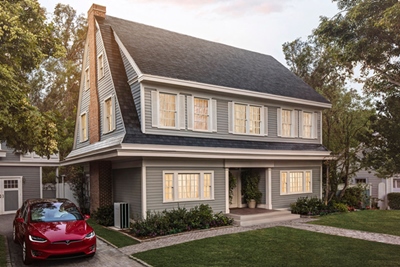 Package deal
Tesla is promoting a three-part package: its own high-end solar shingles, a battery called PowerWall, and its electric cars. The shingle prices, it says, will be in the same ballpark as other roof shingles.

The Palo Alto, California, firm says the package will be in US stores by the end of 2017, manufactured by its subsidiary SolarCity – run by cousins of Tesla chief Elon Musk, and acquired last year for $2.1 billion.

Currently made at a site in Fremont, California, the tiles will run about $22 per square foot, adds the company, which is looking to move production to Buffalo, New York.

At the Solar Energy Industries Association (SEIA) in Washington, D.C., Dan Whitten, the organization’s VP of communications, said SEIA could not comment on the Tesla product specifically - but that the things Tesla is doing “represent the kind of innovation that has brought solar into the mainstream conversation about America’s energy use.”

“Disruptive solar technologies are changing the way we think about keeping our homes comfortable and our vehicles moving,” he added.

From a business point of view, Norwood said, its success will depend on how the installer industry responds.

“It seems that any roofer can install this,” the academic told optics.org. “But you will need to hook up to the grid, or a battery. There’s a huge battery cost included in the installation price.”

Location, location, location
Norwood points out that recent years have seen the price of silicon PV panels plummet. “Most of the value has been captured in installing the panels,” he said.

Location will be a key factor in sales and success, added Norwood after a look at Tesla’s online installation calculator. “A lot of it hinges on where you are, in what state, and size of the house,” he said. “This might not make sense with a large house in Texas, but it might for a small house in California.”

Materials in the shingles are rated as very good building materials for a tile, Norwood noted. “The photovoltaics are silicon-based and provided by Panasonic, which has worked on getting more efficiency from silicon with their HIT approach.”

Based on the web calculator, Norwood said if he was going to re-roof his house, the Tesla shingle would be worth a look. “If I have to replace a roof anyway and I am going to be in the house for a while, it makes sense. But you do have to consider the battery cost, which is quite high ($7000 each).”

If you could sell electricity back to the grid and cover your own needs, it becomes more attractive, he added. “They look pretty nice. It’s hard to tell there is solar energy being generated up there.”

Estimates of the North American residential roofing market range up to $7 billion, growing to a possible $10 billion by 2020.

“So, why would you buy anything else?” asked the tech entrepreneur.