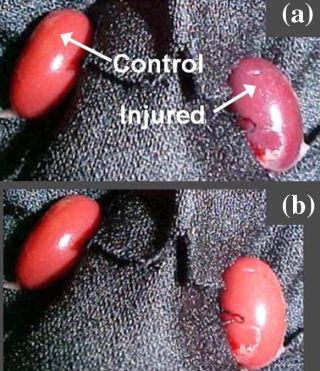 Correct assessments of the damage suffered by the kidney after periods of restricted blood supply, or ischemia, are difficult to achieve. In the absence of any real-time analysis technique, clinicians usually have to rely on invasive biopsies and histopathology to spot the structural and biochemical changes that have occurred.

A project undertaken by Lawrence Livermore National Laboratory, the University of California, Davis, and California Northstate University has developed a promising alternative, by designing an optical technique that may offer real-time assessment of kidney function, and do so with improved accuracy at a lower cost.

The research, published in Journal of Biomedical Optics, combined autofluorescence (AF) images of kidneys collected in vivo under 355, 325, and 266 nanometers illumination, with light-scattering images collected using a relatively narrow band of light centered at 500 nm.

Results showed that the signals collected by this multimodal approach responded to changes in tissue microstructure and blood absorption in the kidney, yielding useful functional information about the tissues of concern.

Early warning signs
The team’s paper notes that previous research into optical assessment of kidney health had related AF intensity to metabolic rate, but the new study developed the strategy further by examining both AF and light-scattering signals at a set of selected wavelengths.

This broader approach is intended to allow a better understanding of the relationship between optical signal response and clinically known physiological responses to injury, revealing the complex combination of changes that could be used to monitor an in vivo organ.

“The results allow for an evaluation of various optical signatures to predict kidney viability, and suggest the potential of such a non-contact approach - currently nonexistent - to provide clinically useful information in real time,” noted the authors.

Tests on the kidneys of rats showed that the multimodal imaging technique successfully provided information relating to tissue function, with the measured ratios of different AF signals responding to various physiological events during both periods of restricted blood flow and its restoration.

Although the mechanisms that underlie these changes in optical signal during and after ischemia are still speculative, the effect could nonetheless be put to use predicting eventual kidney failure from data collected almost immediately following an injury, in advance of any other apparent damage. This could also be of particular value if it forecasts post-transplant behavior, perhaps alerting clinicians to the onset of kidney failure before visual observations suggest a problem.

"This work's exceptional value lies in the realization of a workable practical system that has excellent potential to be adopted in field situations,” commented Andreas Mandelis of the University of Toronto, JBO associate editor.