Could help reduce recalls for automotive, aerospace and other industries. 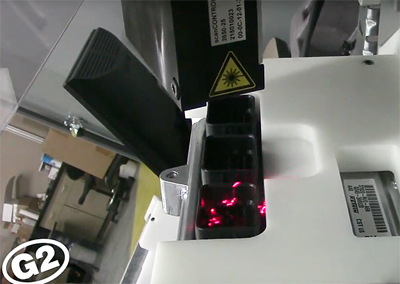 G2 Technologies, a test and measurement company with clients including Honda, 3M, BE Aerospace and NASCAR, has developed a customizable, automated 3D inspection system, which it says “can catch flaws that previous inspection systems would miss”.

The system was developed in response to a client’s need for faster, more accurate connector inspection; the global market for the connector industry is estimated to reach $80 billion by 2022, says the company.

Craig Borsack, president of G2, commented, “So far, inspection of connectors has been limited to 2D assessment and checking by eye, so while an examiner can catch bent or missing pins, a faulty connector with a pin that is just too short to see is easily missed. With 3D inspection systems, manufacturers can now catch such faults before it’s too late.”

The new 3D system from G2 Technologies combines a machine-vision based, non-contact 3D inspection system, a cleaning station, and electrical test and engraving stations. It is built on a PXI platform from National Instruments, based in Austin, TX. It inspects a variety of connectors with pin counts up to 32.

Borsack said that is hoping connector and other manufacturers will consider exploring the automated 3D systems for use in their manufacturing process. “It’s a relatively small investment when you look at the potential savings it offers. Not only can this inspection system help protect a manufacturer from being sued for damages in a recall situation.”

Tech-spec of the test process

The inspection system is installed after stitching, a process that accumulates contact pins and inserts them into molded connector housings. Stitched connectors enter on an input conveyor and pass under a Genie Nano M1920 GigE Vision camera from Teledyne DALSA. 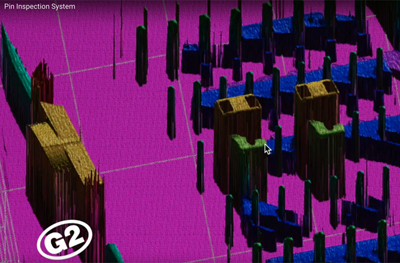 To achieve a complete 3D point cloud, the part is scanned from both directions

An image of the connector is acquired with illumination provided by a DL 194 diffuse dome light from Advanced Illumination, which is then analyzed to verify that the correct part is present and in the proper orientation.

Parts that are properly aligned proceed to an orientation wheel that repositions the part board-side down, for the next station, which is board-side inspection. At this station, a scanCONTROL 2650-25 laser line profiler from Micro Epsilon scans the entire board side of the connector.

Next, connector-side inspection takes place. Due to cycle time requirements, and the need to scan the part from both directions, inspection of the mating side of the connector is performed at two stations by two additional laser line profilers.

Two scans are used because of the shadowing effects created by the connector shell when the part is scanned from one side. To get a complete 3D point cloud, the part is scanned from both directions, then the images are combined to mask out the shadows. The system scans from both sides and creates a plane based on a datum (feature) on the bottom of the mate side connector. This plane is used to measure true position and pin height of the contacts.