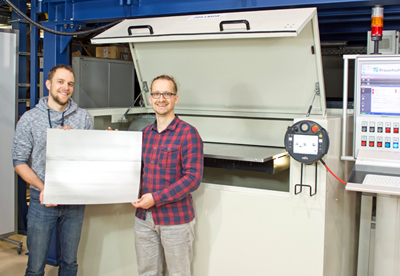 Scientists of the Fraunhofer IWS, Dresden, and the Fraunhofer IFAM, Bremen, have developed a novel technology for the large area, efficient and environmentally friendly pre-processing of fiber glass-metal laminates (materials referred to as GLARE).

The new technology has been jointly developed within the framework of the aeronautical research project AUTOGLARE, which is focused on advanced metal fuselage construction – encompassing fiber glass-reinforced aluminum and automated manufacturing processes to achieve high production rates in the aircraft industry; the sub-project is titled NFM-GLARE.

The Fraunhofer teams comment that adhesively bonded multilayer composites, pre-processed by laser, “verifiably provide excellent adhesion and corrosion properties so that chemical pre-processing in anodizing bathes are no longer necessary.”

The project (reference FKZ: 20W1517D) commenced in 2015 and is coordinated by aerospace manufacturing giant AIRBUS. It is funded by Germany’s Federal Ministry of Economics & Technology, following its approval by the German parliament.

In the aerospace industry GLARE is considered as a lightweight material with significant potential for the future. It consists of several aluminum and fiber layers, each only a few tenths of millimeters thick. 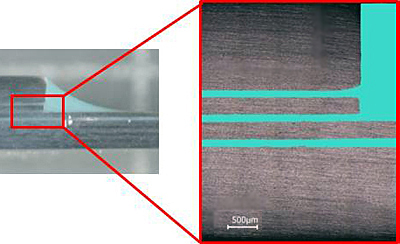 Test geometry for the analysis of adhesion properties (GLARE).

The benefits of the new composite material, compared to pure metals, are an improved burn-through and impact behavior and an enhanced fatigue behavior due to delayed crack propagation.

However, due to very low quantities currently in industrial production, the manufacture of these semi-finished components is hardly automated and therefore is associated with high costs in terms of production and consumption of resources.

So, together with several research and industrial partners, the Fraunhofer IWS and IFAM scientists are now researching into basic technologies for an automated GLARE production. They are focusing their research on the development of processes, which make surface preprocessing, hitherto basing on wet-chemical techniques, more efficient and “environmentally friendly”.

The (new) laser-based, alternative technology faces demanding challenges. Conventional anodizing baths do not only clean the surface but also improve the adhesion to the fiber-reinforced film by means of surface enlargement and activation.

The IWS approach bases on the pre-processing of the adhesive joint by means of cleaning and structuring via laser radiation. So far, pulsed laser systems have been applied for material ablation, because only this kind of laser delivers the high intensity necessary for metal evaporation. Unfortunately, these laser systems can only process few square centimeters. 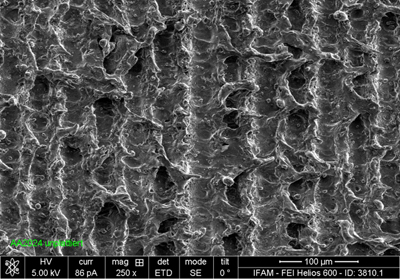 REM-image of a surface processed with a CW laser.

Within this project, however, surface structuring of several square meters is required and thus a considerably more efficient laser system becomes necessary. For the pre-processing procedure the IWS scientists apply a high power, continuously-emitting solid state laser and the remote technology. This optimal radiation focuses in the kilowatt range and the simultaneous quick spot movement across the substrate enables a reproducible material ablation.

In order to achieve a good productivity the laser spot is linearly moved across the surface with a speed of 300 m/s. This process enables ablation rates of currently one square meter per second. In comparison, a wet-chemical preprocessing in different baths takes at least 20 minutes.

Structures measuring 10μm and more, generated on the aluminum surface, enable an optimum adhesion to the bonding film. Studies of the Fraunhofer IFAM Bremen have demonstrated that the laser process enables the ablation of the native, often porous oxide film and the generation of a homogeneous interface with clearly improved corrosion properties.