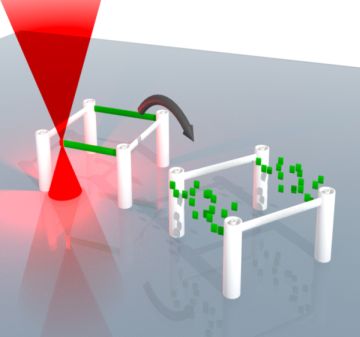 The importance of 3D-printing as an industrial process continues to grow, as the versatile technology underlying additive manufacturing becomes more refined.

A project at Karlsruhe Institute of Technology (KIT) could represent a significant new advance in the field, bringing the ability to create, erase, and modify certain structures on demand. The work was published in Angewandte Chemie.

KIT's breakthrough relates to the development of a new formulation of the ink used in a direct laser writing (DLW) manufacturing operation - a material which cross-links under the action of a laser to create solid structures meeting pre-programed designs.

"Developing an ink that can be erased again was one of the big challenges in direct laser writing," commented Christopher Barner-Kowollik of KIT's Institute for Chemical Technology and Polymer Chemistry.

The project met this challenge by creating an ink with reversible bonding, allowing the building blocks of a structure built from the ink to then be separated from each other after manufacture.

In chemical terms, the structures are initially formed by DLW irradiation of a phenacyl sulfide linker, producing disulfide bonds in a step-growth polymerization via a reactive thioaldehyde.

Subsequently exposing the material to dithiothreitol induces cleavage of the bonds and erases the structure completely, after which direct laser writing can be used again to create a new or modified structure. In this way, the final item's configuration can be altered repeatedly, as designers wish.

3D microscaffolds
According to the published paper, the cleavage of the bonds can itself be used as a structural design tool, since cleavage under dithiothreitol tends to be highly orthogonal relative to bonds created by DLW in other acrylate-based structures. Under the right circumstances, this selective cleavage allowed the team to create well-defined gratings with line separations of 300 nanometers using the new material.

An ink with defined breaking points could now be used for a variety of DLW applications, perhaps leading to structures that integrate erasable and non-erasable areas, and allowing the creation of support constructions for manufacturing operations that can then be removed later on.

Another avenue is the concept of 3D designer petri dishes for use in biology, a topic already explored by KIT - and for which its researchers won the Erwin Schrödinger Prize in September 2016 - allowing cell cultures to be grown in three dimensions on a laboratory scale. Incorporating the new erasable technology allows parts of the 3D microscaffold to be removed during cell growth, to study how the cells react to the changed environment.