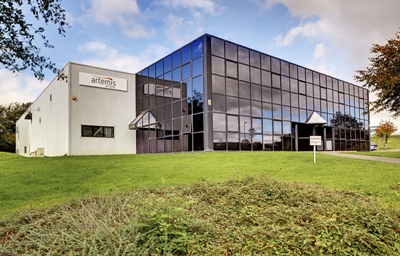 The Plymouth-headquartered firm says that the filter has been developed to counter what it describes as the growing threat to thermal camera systems posed by long-wave infrared (LWIR) lasers.

Laser protection needed
“Current global, political and security unrest has led to a proliferation in the use of thermal imaging camera systems in border security, observational unmanned aerial vehicles (UAVs) and police and security vehicles,” states the company.

And although such cameras are often protected from more obvious threats, Artemis says that they can be disabled by LWIR lasers. The company’s thin-film protective filter blocks out part of the LWIR range - Artemis won’t reveal exactly which wavelengths - while transmitting the rest of the infrared spectrum so that the camera can still ‘see’.

“Without this filter, infrared lasers can disable the thermal camera systems, making them effectively ‘blind’,” says the firm.

Developed over four years, the filter has in fact been in production for the past 18 months, after Artemis received a request from the UK military to begin supplying the technology.

Sales director Jamie Pindard says that Artemis is now ready and able to offer the laser protection filters on a wider basis.

“The initial application was a UK armored vehicle,” he told optics.org. “The technology is currently being qualified for another armored vehicle upgrade and [we are] also in talks with several US partners about a product launch.”

Broad interest anticipated
While armored vehicles are expected to remain the major market for the technology, Pindard is also expecting interest in UAV, helicopter and other aircraft applications, as well as border security.

“As acknowledged experts in this field, we recognized that a shift in technological focus and an increase in the use of thermal camera systems created a need for a new type of product where it was not just the eye being protected from laser threats, but the camera itself,” he added.

“We are anticipating widespread interest for this latest innovation from a broad range of industries in which thermal imaging cameras provide an essential front-line defense, particularly in the world we live in today.”

While the company is currently selling the filters to manufacturers of cameras and sights - who can then offer their product as ‘protected’ – Artemis believes that there may also be an after-market sales opportunity that would enable more traditional infrared camera companies to upgrade their offerings.

Artemis, whose factory includes a 16,000 square-foot production coating laboratory, is able to draw on 60 years of expertise in optical thin-film technology. The business, originally founded in 1952 as Optical & Electrical Coating Ltd., was owned by defense giant Thales and then Qioptiq during the 2000’s, before setting up as Artemis in 2008.

Last October, the company revealed plans to double its workforce to 60 employees by the end of the decade, after it signed an agreement to supply BAE Systems with advanced optical assemblies used in the latest cockpit head-up displays (HUDs) for pilots.