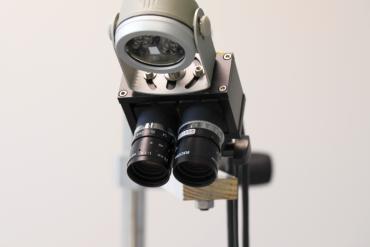 The heart rate and breathing of babies are normally monitored by sensors placed on the skin, but these can be both uncomfortable for the babies and prone to false alarms.

A camera system able to detect and measure a baby's vital signs without needing to be in contact with the skin has now been developed by the Swiss Federal Institute of Technology in Lausanne (EPFL), Neuchâtel-based research center CSEM and University Hospital Zurich (USZ). The project forms part of the broader Swiss federal research initiative Nano-Tera.

The system uses a camera to detect a baby's pulse, by watching the small changes in skin color which take place with each heartbeat. Meanwhile, the baby's breathing is monitored through movements in the baby's thorax and shoulders. The use of infrared cameras allow the monitoring operation to continue overnight, without disturbing the baby's sleep.

"Conventional skin sensors placed on a baby's chest are so sensitive that they generate false alarms nearly 90 percent of the time, mainly caused by the babies moving around," said Jean-Claude Fauchère of USZ's division of neonatology. "This is a source of discomfort for the babies, and a significant stress factor for nurses and a poor use of their time. It distracts them from managing real emergencies, and can affect quality of care."

The new project involved collaboration between researchers at CSEM and EPFL to develop cameras sensitive enough to detect minute changes in skin color, and also the design of computational algorithms able to process the collected data in real time. CSEM focused on assessing respiration, while EPFL worked on measuring the baby's heart rate.

Multi-modal approach
An initial study on a group of adults used a camera system to monitor an area of skin on the forehead. This proved that the algorithms were able to isolate an area of pixels and track it as the person moved, while using minor changes in the color of the pixels to determine the pulse. The trial also showed that the cameras produced practically the same results as conventional sensors, said the project team.

Preliminary tests will be run shortly on newborns at University Hospital Zurich, to confirm that results under real-world conditions also match data from conventional skin sensors.

The new monitoring system has been developed as part of NewbornCare, one of a number of research projects operated by the Swiss research program Nano-Tera. This federal initiative encompasses four strands of research identified as driving engineering and information technology in Switzerland for the next century: health, security, energy, and the environment.

The research under way in NewbornCare is intended to ultimately produce several novel technologies, including an innovative monitoring system hosted on smartphones or tablets for medical staff, and a computer-aided diagnostic tool to detect and classify cardiac events based on learning methods.

A multi-modal approach combining the use of near-IR spectroscopy to measure oxygenation and a camera system to monitor heart and respiration could completely eliminate false-alarms in neonatal vital sign monitoring, according to the project team.