New US-based organization says it will focus on educating industry, government and the general public on the benefits of the technology. 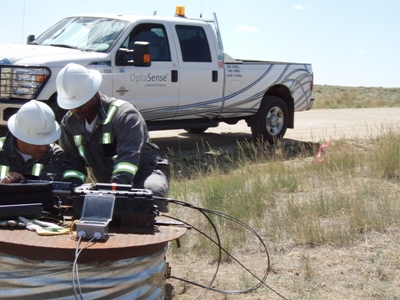 In the US, a dozen industry partners including Corning and Furukawa-owned OFS have established a new trade association dedicated to fiber-optic sensing.

The Fiber Optic Sensing Association (FOSA) says that it will focus on educating industry, government and the general public on the benefits of the photonics technology, as it is increasingly deployed in applications like strain sensing for structural health monitoring and spotting leaks from gas pipelines.

The new organization is an affiliate of the Fiber Broadband Association, whose mission is to accelerate the deployment of fiber-optic networks for telecommunications applications.

Mission and members
“The organization was formed with the mission to provide greater awareness of the benefits of fiber-optic sensing technology and its applications in today’s marketplace,” the FOSA partners announced.

At the moment, that effort includes a web site featuring educational content on the technology and its impact, with an inaugural meeting set to take place in Washington, DC, next month and a series of “members-only” public policy update meetings scheduled for the rest of the year.

Aside from optical fiber manufacturers Corning and OFS, the founding FOSA partners include the major cable providers AFL Global (owned by Japan’s Fujikura) and Prysmian Group.

Among the sensing technology companies involved are OptaSense, which is owned by the UK technology firm QinetiQ, Switzerland-based Omnisens, the US division of Frauscher Sensor Systems, and venture-backed UK company Fotech Solutions.

Fast-growing market
They are coming together partly to raise greater awareness of the benefits of fiber-optic sensing for remote measurement of acoustics, temperature and strain.

The technology is able to detect various problems that might otherwise be missed, for example pipeline leaks, digging, tunneling, seismic activity, unsafe temperatures, or crumbling infrastructure.

In fact, as FOSA points out, fiber-optic sensing is already used to monitor thousands of miles of power lines, pipelines, international borders, and other critical infrastructure around the world.

However, that only amounts to a relatively small market at present - certainly when compared with fiber-optic telecommunications. The new organization cites a recent sector analysis by BCC Research suggesting that the global market for fiber-optic sensors should reach $3.2 billion by 2021, growing at a compound annual rate of close to 10 per cent from the current size of just over $2 billion.

Cohen said in a release from FOSA: “Fiber-optic sensing has the potential to dramatically improve the lives of many millions of Americans, enhance business operations, and create jobs.

“Businesses, institutions, and government agencies already deploy these applications to make our roads safer, protect our environment and strengthen our security. However, to further these improvements and impact, industry, consumers, and government need to better understand the value of, and get greater access to, information on this advanced technology. This is why we are creating FOSA.

“This new organization will educate key players in all sectors and promote awareness of fiber sensing technology to help accelerate the use of this critical technology.”