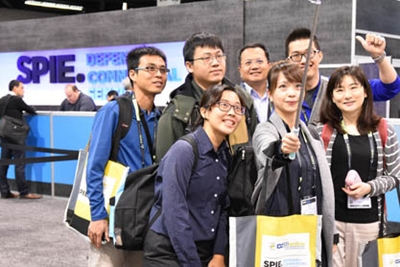 First Thomas Burns, director of the Strategic Technology Office at DARPA, the US Defense Advanced Research Projects Agency, asked for help with innovations in sensors and communications to keep the US military ahead of its adversaries on fast-evolving strategies.

Then Parker Abercrombie, lead scientist at the Immersive Visualization Project in NASA’s Jet Propulsion Laboratory (JPL), took the whole crowd off to Mars for an on-screen workout much like the virtual-reality space exploration sessions he runs at JPL, and invited the audience to think how such an opportunity might enhance any such training.

Virtual mission to Mars
Conventional space training just doesn’t work, Abercrombie said. “Looking at pictures, we can’t understand what an area of Mars is like,” he said, showing pictures taken by the Curiosity rover. A curve on Mars shows up as a straight line, and a pebble will look like a boulder. But by letting trainees “enter” a 3D landscape that combined images from several sources, their skills soared.

Abercrombie showed a heap of data to document how his “immersive visualization system” works two or three times better than the official “mission tool” in getting trainees to estimate distances and locations for maps.

Then the crowd went inside the International Space Station, before joining Abercrombie for a virtual jog up a mountain on Mars - where the geoscientists he trains do likewise. In all, the Abercrombie show, featuring avatars of himself and a colleague “walking on Mars” in real-time must have been one of the most dramatic plenary presentations in the DCS conference’s history.

Earlier Burns had reminded his audience, numbering several thousand at the Anaheim Convention Center, that DARPA is the American military arm that invents new things “that fly and swim and crawl and go boom.”

After the Soviets got the jump on America by launching Sputnik in the 1950s, President Eisenhower launched DARPA to prevent such surprises. Burns said DARPA survives by bringing in the smartest people from industry, universities, and businesses both small and large. “And then they return,” he said, “or they move on somewhere else.”

Several times he asked the DCS attendees to send in ideas from their own areas of photonics expertise to help build a new culture at DARPA, a team that is building, in Burns own words, “a system of systems that work together to achieve a new type of weapon: that weapon is complexity.”

Over the years, DARPA has recorded many successes in battlefield intelligence, surveillance and reconnaissance (ISR), stealth devices, precision strike capabilities.

But today such innovations take too long to devise, especially when other countries can match US innovation with new weapons that, Burns said, “can be every bit as good as or better than our systems.”

He called his plan “a composable strategy,” in which all parts and agency divisions are constantly able to fit existing elements together in new ways. “It’s the third wave of systems,” he said.

“I am advocating a framework that creates a system of systems that can be tailored for different kinds of conflict, that doesn’t take forever to get things out the door. It will combine manned with unmanned systems, so our adversaries cannot keep up with us in time or in space.”