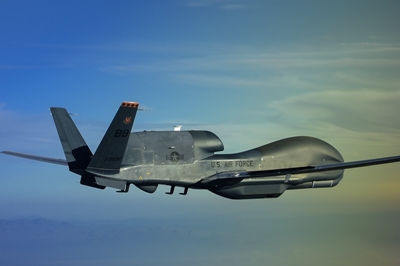 US defense contractor Northrop Grumman has confirmed that the “MS-177” multispectral optical sensor payload has for the first time flown on board the US military’s longest-range unmanned aircraft, or drone.

The inaugural flight on one of Northrop’s “RQ-4 Global Hawk” high-altitude surveillance planes demonstrated that the drone’s capability can be extended to a wider range of intelligence, surveillance and reconnaissance (ISR) missions, the company claimed.

“The flight tests mark the first time the sensor has been flown on a high-altitude long-range autonomous aircraft and extend the mission capabilities of the system,” reported Northrop.

“The MS-177 sensor is designed to provide capabilities to not only ‘find’ targets using broad area search and different sensing technologies, but to also fix, track, and assess targets through its agility and multiple sensing modalities.”

Multispectral benchmark
The MS-177 is a multispectral camera operating across a wide range of the optical and infrared regions that was developed by the United Technologies subsidiary UTC Aerospace.

According to UTC it offers the longest-range combat identification imaging capability in the US military's airborne ISR inventory, and is able to operate at high altitudes for 30 hours.

Northrop says that following the initial flight tests in California its checks are set to continue through the first half of this year. It has also been testing an optical bar camera capable of generating panoramic imagery on board the same platform.

“The MS-177 is the new benchmark in imaging ISR sensors and its integration into the Global Hawk platform expands the mission capability we can provide,” said Mick Jaggers, VP and program manager of the Global Hawk program at Northrop Grumman.

Jaggers also told the aviation web site Flight Global in December last year: “We will operationalize the MS-177 so that the United States Air Force can declare initial operational capability for that sensor system by the end of 2017.

“In this particular test we’ll test how the air vehicle accommodates for new weight and new center of gravities, and then we’ll start demonstrating the recording and dissemination of the ISR information.”

Endurance record
According to the US Air Force, the remotely piloted RQ-4 Global Hawk is able to provide global, 24-hour, all-weather ISR, and the drones have been fielded in the skies above Iraq and Libya, as well as during humanitarian relief operations over Japan following the devastating earthquake and tsunami of March 2011.

The UAVs carry electro-optic, infrared and synthetic radar sensors that can also be controlled remotely, while data collection plans can be updated “on the fly”. In 2014 one of the RQ-4s set a new endurance record for the US military when it flew for more than 34 hours without refueling.