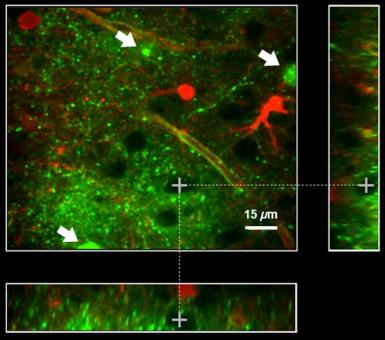 The role of K+ potassium ions in neuronal activity has been of interest to scientists for some time, since the ions are a key species in electrical signalling and heavily involved in the excitability of neurons.

In particular the concentration gradient of K+ between a relatively high concentration inside neurons and a lower concentration outside cells is known to be significant, with brain cells having developed a tight control on the level of extracellular K+ in order to avoid the onset of uncontrolled activity typical of epileptic behavior.

Monitoring the release of K+ during neuronal activity and measuring its concentration has until now usually involved the use of microelectrodes sensitive to the K+ species, inserted into the appropriate extracellular space (ECS). Although these produce accurate data, they can only provide a localized measurement and also introduce a dead space into the tissue, which may alter the local structure.

An optical imaging approach would avoid these problems, but the imaging of ion dynamics with suitable ion-sensitive dyes faces some practical hurdles, including a lack of suitable dyes and their diffusion through the ECS when in use. They have also been limited to imaging of superficial cortical regions.

A project at the University of Lausanne has investigated a promising solution, by developing a fluorescence imaging technique employing a K+-sensitive nanosensor based on dendrimer nanotechnology. As well as demonstrating the efficacy of the approach, the study has also suggested the possibility of creating multimodal nanosensors for other neuronal studies.The work was published in Neurophotonics.

"Measurements of potassium ions in the brain have so far been done using K+-selective microelectrodes," commented Jean-Yves Chatton of the University of Lausanne. "They are certainly valuable tools, but they are somewhat invasive and provide only a measurement of K+ changes around the microelectrode tip. They also lack spatial information about how the distribution of K+ varies across the brain tissue. Our nanosensor approach proposes to solve both issues."

The sensor exploits advances in the manufacture of dendrimers, artificial nanoscale materials with highly branched structures that are attractive to the health and pharmaceutical industry as a means to both enhance existing products and allow entirely new ones. At present dendrimers made from polyamidoamine (PAMAM) are the most common class, and the Lausanne project used PAMAM functionalized with polyethyleneglycol as a scaffold for small molecules of a K+-sensitive dye, held in place by a noncovalent interaction.

Multimodal nanosensors
"The typical indicator molecules have a small molecular weight, and when placed in the ECS they diffuse away and become diluted in seconds, preventing us from doing stable measurements," said Chatton. "We therefore developed a strategy to incorporate the fluorescent molecules inside a dendrimer with a size of 5 to 6 nanometers, which enables them to remain trapped in the extracellular space for extended periods of time."

Another challenge was that existing fluorescent probes were of poor sensitivity and selectivity, and used UV light. The Lausanne project was able to work with a new indicator developed by one of the University's research partners, an indicator delivering improved fluorescence quantum efficiency along with better selectivity for K+, and which also worked with visible light.

The team first verified the efficacy of the sensor in a two-photon excitation setting using sol-gels, before applying it to tests on acute brain slices from mice - thin slices of brain which maintain the same neuronal circuitry as they previously had in vivo. Results proved that the dendrimer stabilized the dye in the ECS for extended periods of time without dissipation, a significant advantage over traditional methods.

The project also developed another version of the nanosensor in which a second dye molecule was also present, this time one insensitive to K+ and which emits in the red spectrum. Data from the two channels in this multimodal multidye design allowed the team to compensate for movement artifacts arising from small drifts in position affecting the focal plane, and produced more precise ratiometric imaging of K+ dynamics.

Having demonstrated the feasibility of its nanosensor for imaging in the ECS, this project team is considering possible extensions to the nanosensor strategy. A ratiometric nanosensor design could allow several optical readouts to be combined, pointing towards multimodal optical nanosensors and a broader range of possible applications.

"We have shown the proof of principle and validated the approach in vitro and in acute brain slices," commented Chatton. "Now we are starting to apply this optical approach in living mice by in vivo two-photon brain imaging. Although we are not considering clinical implementations as yet, the results we obtain from these experiments could indicate the clinical paths to pursue."