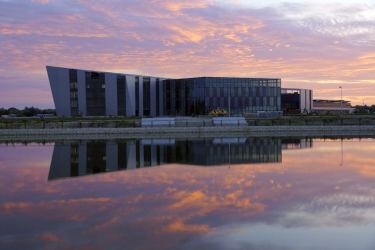 Its goals include the provision of laser-driven secondary sources emitting coherent extreme-UV and X-ray radiation in attosecond pulses, alongside scientific and technological research into high-peak-intensity and high-power lasers.

A consortium led by developers Ekspla and Light Conversion has now announced the production of a near-infrared laser system designed and built to suit ELI-ALPS, a source christened Sylos 1. Design and building of the Sylos 1 system started on November 2014 and is valued at around €4 million, according to the project team.

Sylos 1 employs optical parametric chirped pulse amplification (OPCPA), and an architecture in which femtosecond and picosecond parametric amplifiers are seeded by broadband pulses. Those pulses are themselves stabilized by a technique termed carrier envelope phase (CEP) control. Driven by diode-pumped Yb:KGW and Nd:YAG lasers running at 1 kHz repetition rate, the system delivered pulses in the sub-9-femtosecond range, along with an average power output above 53 W and a peak power of 5.5 TW.

The group's research was published in Optics Express, where the team noted that an upgrade planned for the near future is expected to enable generation of 6 fs pulses by adding OPCPA stages to extend the spectrum to the long-wave side. The upgraded system will be installed at the ELI-ALPS laser facility.

European laser research
"This system is unique due to its outstanding combination of power and pulse duration," added Ekspla CEO Kestutis Jasiunas. "Five terawatts establishes Sylos as one of the most powerful systems in the world generating 10 fs or shorter pulses at 1 kHz repetition rate. Its innovative technology featuring comparatively simple and cost-effective OPCPA is a key approach in equipping the high intensity laser facility to reach attoseconds in deep UV regions."

ELI-ALPS is part of Europe's billion-dollar Extreme Light Infrastructure (ELI) project, intended to become home to a collection of the world's most powerful light sources and become the first international laser research facility - a "CERN for laser research".

The ELI capability will ultimately be spread across four locations, three of which are presently being implemented. In addition to ELI-ALPS in Hungary, ELI-NP is focusing on the study of photonuclear physics and its applications from a base in Romania, while ELI Beamlines, located in the Czech Republic, is designed as the high-energy, high repetition-rate pillar of the ELI effort.

The ELI research effort is at present being funded by a combination of European Regional Development Funds and national contributions from the host countries, totaling about €850 million, coordinated by the ELI Delivery Consortium International Association.

Once ELI's Operation Phase commences, currently expected to take place during 2018, its activities will be unified under the single legal umbrella of a newly established European Research Infrastructure Consortium, or ELI-ERIC.