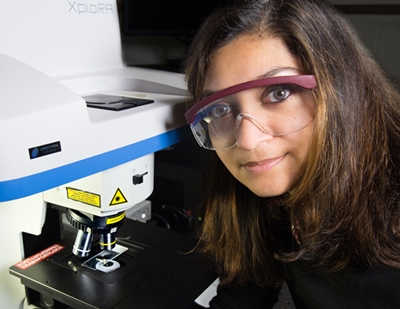 Spectrometers used in space applications could be reduced in size drastically, if the development of a prototype instrument based around quantum-dot wavelength “filters” proves successful.

A collaboration between NASA and the Massachusetts Institute of Technology (MIT) is currently working on the approach, with a view to launching the first such system on board a CubeSat.

Miniaturization
Spectrometers are used in virtually all space missions, and NASA is hoping that adopting quantum dots could transform the way that they are built and integrated, at potentially a very low cost.

Bawendi’s group has pioneered quantum dot technology since the early 1990s, developing photovoltaic, biological and microfluidics applications. Meanwhile, quantum dots are starting to have a major impact on the consumer electronics industry, with a multitude of televisions now featuring the technology to enhance LCD quality.

Sultana says that the approach could miniaturize and potentially revolutionize space-based and other spectrometers, particularly those used on unmanned aerial vehicles (UAV) and small satellites. “It really could simplify instrument integration,” she commented in a NASA release.

Initially, that could be in the form of an absorption spectrometer, where instead of the traditional combination of optical components like gratings, prisms, or interference filters to split light into different wavelengths, quantum dots would effectively do the light filtering themselves.

Because the absorption or emission of light by quantum dots is determined by their diameter – the smaller the dot, the shorter the wavelength - an array of different-sized dots could in principle do the same job as the familiar optics setup.

And even though conventional spectrometers are already being miniaturized thanks to integrated optics and photonics devices, they are still relatively large. Sultana explained:

“Higher spectral resolution requires long optical paths for instruments that use gratings and prisms. This often results in large instruments. Whereas here, with quantum dots that act like filters that absorb different wavelengths depending on their size and shape, we can make an ultra-compact instrument. In other words, you could eliminate optical parts, like gratings, prisms, and interference filters.”

Tunable wavelength filters
In theory, a spectrometer could be based around a virtually unlimited number of dots of different sizes, to provide high-resolution performance.

“This makes it possible to produce a continuously tunable, yet distinct, set of absorptive filters where each pixel is made of a quantum dot of a specific size, shape, or composition,” Sultana said. “We would have precise control over what each dot absorbs. We could literally customize the instrument to observe many different bands with high spectral resolution.”

At the moment, Sultana is working to develop and demonstrate a 20 x 20 quantum-dot array sensitive to visible wavelengths needed to image the sun and the aurora.

In principle the approach could be broadened, using quantum dots to cover wavelengths from the ultraviolet to the mid-infrared spectrum – suggesting a wide range of potential applications in Earth observation, heliophysics, and planetary science.

NASA reports that Sultana is developing an instrument concept specifically for a CubeSat application, with MIT doctoral student Jason Yoo looking to synthesize precursor chemicals to create the dots and then print them onto a suitable substrate. “Ultimately, we would want to print the dots directly onto the detector pixels,” Sultana said.

Although the approach is at a very early stage, the NASA researcher adds that the plan is to raise the technology-readiness level very quickly. “Several space-science opportunities that could benefit are in the pipeline,” she said.