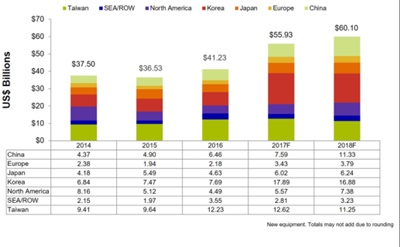 The Semiconductor Equipment and Materials International (SEMI) industry organization has confirmed the record-smashing level of investment in chip manufacturing equipment this year – with optics and laser technology companies among those reaping the benefits.

At $55.9 billion, expected spending on equipment in 2017 eclipses the previous high-water mark of $47.7 billion, which was set 17 years ago amid the dot-com and telecommunications boom year of 2000.

The figure also represents year-on-year growth of 36 per cent - far outstripping the 9 per cent growth predicted by SEMI in its December 2016 forecast.

“In 2017, South Korea will be the largest equipment market for the first time,” reported SEMI, adding that Samsung has led the charge as spending in the country's chip fabs more than doubled to $17.9 billion. “After maintaining the top spot for five years, Taiwan will place second, while China will come in third.”

By far the largest chunk of that investment has been in wafer processing equipment, on which spending in 2017 is believed to have grown 37.5 per cent year-on-year, to $45 billion.

The “other front-end” segment, determined by SEMI’s analysts to consist of fab facilities equipment, wafer manufacturing, and mask/reticle equipment, has also risen sharply, to $2.6 billion.Spending on assembly and packaging equipment is projected to grow by around 26 per cent, to $3.8 billion, while semiconductor test equipment is forecast to increase by 22 per cent, to $4.5 billion this year.

Among the key beneficiaries from the unprecedented level of spending is lithography giant ASML. The Netherlands-based company, whose extreme ultraviolet (EUV) systems rely on hugely powerful carbon dioxide lasers and the diamond optics needed to withstand such blasts, expects to ship 20 of the €100 million-plus units in 2018, and upwards of 30 in 2019.

The investment in EUV and other new silicon wafer processing equipment is flowing down the photonics supply chain strongly, with the likes of Trumpf, II-VI, Coherent and MKS Instruments each reporting booms in sales and earnings this year. 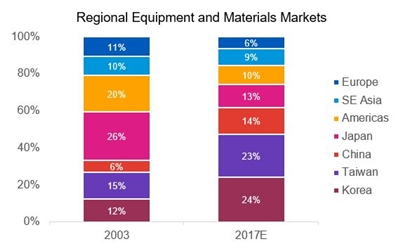 Device market tops $400BN
While SEMI’s figures show that investment in Korea has more than doubled year-on-year, the market for chip manufacturing equipment has also grown strongly in Europe, where spending is up 57 per cent on the 2016 figure. Investment was up nearly 30 per cent in Japan over the same period.

The organization reckons that China will drive the market to new highs next year, with equipment sales expected to rise nearly 50 per cent in the country, to $11.3 billion.Korea is expected to remain the location of largest investment, where spending will reach some $16.9 billion.

Meanwhile, says SEMI, the market for semiconductor devices will also hit an all-time high this year, as it tops $400 billion for the first time. PCs and then smart phones have been largely responsible for driving the market from $100 billion in 1995, $200 billion in 2000, and $300 billion in 2010, but applications in industrial, automotive, medical, and consumer markets are now taking demand to new levels.

After flat-lining at around $330 billion between 2014 and 2016, the market for semiconductor devices is believed to have grown by some 21 per cent this year. That represents the fastest rate of expansion since 2010.