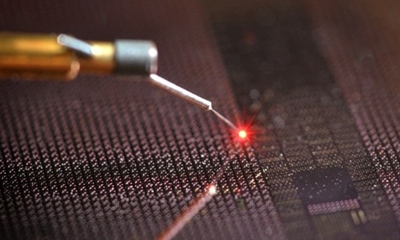 Optoelectronics company Finisar is to expand its VCSEL production capacity dramatically next year, with more than $100 million of investment earmarked for a 6-inch wafer production fab in Sherman, Texas.

The facility, a short drive from the company’s existing VCSEL wafer fab in the Dallas suburb of Allen, has been acquired to address what Finisar’s CEO Jerry Rawls anticipates will be “gigantic” demand for VCSEL arrays in 3D sensing applications.

At the moment Apple’s new iPhone X is the driving that demand, with speculation that Finisar and Lumentum are among the suppliers of one of the key components behind Apple’s “Face ID” security technology.

Announcing Finisar’s latest quarterly results Rawls said: “During the second [fiscal] quarter, we began shipping production quantities of our VCSEL arrays for 3D sensing. In addition, after the end of the quarter, we acquired an approximately 700,000 square-foot facility in Sherman, Texas.”

The CEO added: “In the second half of calendar year 2018, we expect this facility will allow us to produce VCSEL arrays using 6-inch wafers for both consumer and automotive applications.” The company’s fab in Allen produces VCSEL devices on a 4-inch wafer platform.

Non-disclosure agreements
Rawls would not be drawn on whether Finisar’s current VCSEL array output was destined for Apple, saying in an investor conference call to discuss the latest results:

“We have some non-disclosure obligations that really limit what we ought to say about any customer in that market. I can tell you we’re producing as fast as we can and shipping everything we can make.”

Finisar’s CFO Kurt Adzema added that in the latest reported quarter the company only recorded “low single-digit millions” of dollars in revenue related to VCSEL arrays. “We are working hard and making progress on our yields, but our customers would prefer that we don’t disclose the exact number that [we] would [put] out there,” he said.

Questioned on the wisdom of investing upwards of $100 million on equipment alone for the new VCSEL fab over the course of the next year for an application still at the “nascent” stage, Adzema said:

“We obviously have some confidence based on our interactions with a variety of customers in both consumer and automotive [markets] that this is going to be a very important space for us. We feel very good about our relative position in this space, and that’s why we’re making the investment.”

‘Gigantic’ demand
Rawls chimed in when questioned about the overall potential of the emerging applications, adding: “3D sensing is essentially gigantic. If all the customers and the consumer space and the automotive space really build systems and deploy them as they have indicated to us recently, then no matter how big this building is that we just bought, and [if we] fill it full of equipment, it’s unlikely that we can supply all of the demand that we’ll need to supply.”

“I mean, it’s measured in billions of dollars [and] we are building arrays for a lot of different people in both mobile and in automotive. Some of them are quite small arrays and some of them are gigantic arrays.”

Some of the long-lead-time equipment for the new fab is already on order, with Rawls adding that there would be an additional challenge posed by the switch to a larger wafer size.

But the potential pay-off could be huge. The additional capacity implied by the size of the Sherman facility – previously operated by Texas Instruments - suggests that Finisar could be selling upwards of $100 million worth of VCSEL arrays by the time it is fully ramped.

As well as the competition with Lumentum, Finisar will be up against the likes of II-VI, Philips Photonics and ams-owned Princeton Optronics – all of whom have been making significant investments in VCSEL production capacity.

For its latest financial quarter, which ended October 29, Finisar posted a 10 per cent year-on-year decline sales to $332 million, as demand from OEM customers in China’s optical communications space continued to decline.

Although sales are expected to remain somewhat flat before the new 3D sensing application demand really begins to kick in, Finisar’s stock price edged up around 3 per cent in early trading on the Nasdaq exchange following the earnings release.