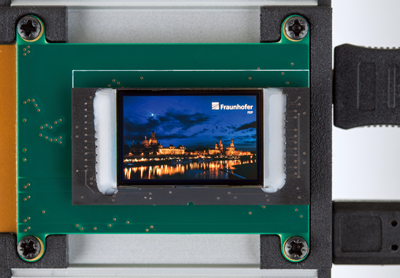 The new OLED microdisplay has a resolution of 1920x1200 pixels.

Virtual reality (VR) glasses are increasingly popular, but they have usually been heavy and oversized compared with conventional spectacles – until now. Large-area microdisplays are expected to change that, because they make it possible to produce ergonomic and lightweight VR glasses. The new OLED-based displays achieve reach high frame rates and extremely high resolutions with “extended full HD”.

These displays are cheaply available and employ simple optics to provide a wide field of view. The disadvantage is that they produce pixelated images because of their limited resolution and insufficient pixel density. Modulating LCD and LCOS microdisplays are also used. They are not self-illuminating, however, which means an external light source is necessary. In order to produce VR glasses that are light and ergonomic, some manufacturers are therefore already focusing on OLED microdisplays.

These are based on organic light-emitting diodes, which are integrated onto a silicon chip and are self-illuminating. As a result, they are energy-efficient and yield very high contrast ratios >10,000:1. In addition, the fact that there is no need for a backlight means that they can be constructed in a simpler fashion, with fewer optical components.

Another advantage is the fast switching speed of OLEDs, which occurs in a few microseconds compared with milliseconds in the case of liquid crystal-based displays. This enables the achievement of high frame rates as well as the use of special modulation processes that improve the perceived image presented.

As part of the EU’s LOMID project – an acronym for large cost-effective OLED microdisplays and their applications – researchers at the Fraunhofer Institute for Organic Electronics, Electron Beam and Plasma Technology (FEP) in Dresden, Germany, have been collaborating with partners from industry to develop innovative OLED microdisplays that significantly outperform others currently on the market.

Within LOMID, the Fraunhofer FEP is responsible for designing the integrated circuit on the silicon chip, creating OLED prototypes, and coordinating the whole project. Philipp Wartenberg, head of department at Fraunhofer FEP, commented, “Our goal is to develop a new generation of OLED-based displays that provide outstanding picture quality and make it possible to produce VR glasses in a compact format. We aim to achieve this with a specially-designed OLED microdisplay.”

A notable feature of the microdisplays that are being developed within this project is that their resolution extends to “full HD”, which means they have a resolution of 1920 x 1200 pixels (WUXGA). The diagonal screen size is about one inch (25mm), and the frame rate is around 120 Hz. That means 120 such images are displayed every second, which makes movements in the virtual world seem very fluid indeed, the developers say. 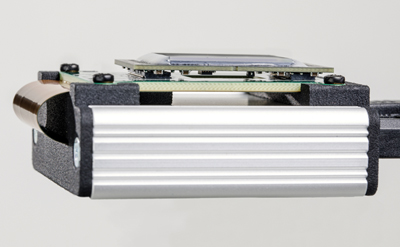 Demonstrator of the WUXGA OLED microdisplay.

Two components make up the microdisplay: a silicon chip to control the pixels, and an OLED. This OLED consists of several organic layers, which are monolithically integrated on silicon wafers. The microdisplay’s resolution and frame rate are set by the chip with the help of its integrated circuit.

Wartenberg explained, “We’ve been very successful at device innovation thanks to a cleverly designed system concept and modern design methodology, not to mention our more than ten years of experience at Fraunhofer FEP in designing OLED microdisplays.”

The researchers have already made their first prototype, which they first presented at the European Forum for Electronic Components and Systems 2017 (EFECS), in Brussels from December 5 to 7. Further prototypes are due to follow by the middle of 2018.

Industry partners involved in the project have already indicated their interest in converting this microdisplay into a marketable product in the near future. In this respect, the use of OLED microdisplays is by no means limited only to VR glasses – even though this may well be the largest market in the medium-term. OLED microdisplays are also suitable for other products such as augmented reality (AR) glasses or view finders in cameras.

The underlying technology of CMOS-integrated light emitters also has potential uses in other market segments such as optical metrology and identification, or optogenetics. Especially with regard to microdisplays in consumer-facing augmented reality glasses, the researchers still see some as yet unresolved challenges that they wish to tackle in the future.

These challenges include: very high levels of luminance and efficiency (which will necessitate removing the color filters used until now, and replacing these with directly structured emitters); a high yield for a large (chip) area; curved surfaces for more compact optics; circular light panels; irregular pixel matrices at even higher pixel density; integrated eye tracking; and transparent substrates.