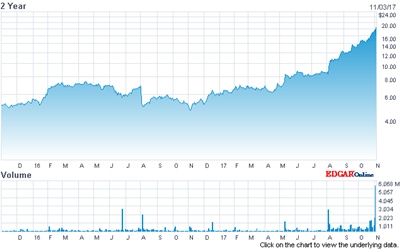 With sales in the three months ending September 30 having already more than doubled on the same period last year, CEO Michael Burger reported:

He added that after receiving several large requests for ESI’s “5335” series of ultraviolet laser drilling systems, total orders for the quarter came in at $128.9 million.”

That figure compares with the $71 million in revenues posted for the latest quarter – up from $29.7 million a year ago. Figures for the first half of ESI’s current financial year illustrate the turnaround, with the company swinging to a net profit of $7.2 million on sales of $143.7 million – compared with a net loss of $9.8 million on sales of only $77.3 million last year.

Burger, who took over as CEO at the then-struggling firm just over a year ago, told an investor call to discuss the latest results that the cost-cutting restructuring announced in February has also been completed.

“We saw extraordinary demand this quarter driven by capacity adds related to overall [mobile] device growth along with the introduction of several new material, technology, and applications in the consumer market,” he said.

“Within the smartphone market specifically, new display, sensing, and RF features and technologies drive the interconnect requirements within these devices, which means more flex circuits per device at higher complexity. Our industry leading 5335 family of products is ideally suited to meet the technical and throughput challenges of these new applications.”

Semiconductor momentum
Burger added that ESI was also benefiting from the current high level of spending on semiconductor capital equipment, noting that the company had just registered its strongest quarter for semiconductor product bookings in more than a decade.

Examples of ESI products in this area include the new “Ultrus” wafer scribing tool, which incorporates an ultrafast laser source and delivers an average power of 15 W to target wafers.

With demand for industrial lasers rising quickly on a number of fronts, Burger was asked whether ESI had encountered any problems sourcing parts in recent weeks.

“We’ve had some issues but our supply base has been tremendous and we've been able to work through and work around some of the shortages,” the CEO responded, adding that with those issues now addressed, it should be “plain sailing ahead” as ESI works through its backlog.

With sales in the December quarter now expected to range between $80 million and $90 million, markets responded to news of the surge in demand by sending ESI’s stock up 30 per cent.

That bounce means that the Nasdaq-listed company is now trading at a decade long high. At around $21, the stock has more than tripled in value since the start of 2017.