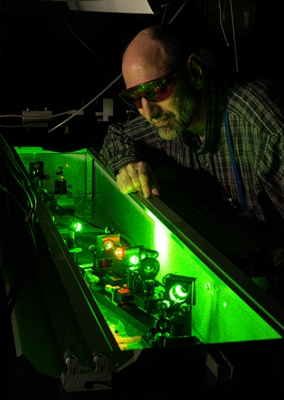 Scientists from the US National Institute of Standards and Technology (NIST) and Hood College in Maryland have raised concerns over the effectiveness of laser safety glasses when using ultrafast lasers.

According to their study of 24 samples of protective filters used in eyewear from five different manufacturers, published recently in the Journal of Laser Applications, the broad bandwidths and variable center wavelengths of femtosecond sources may compromise the ability of some filter materials to block powerful pulses.

The NIST team, which is now preparing to extend the study into a second phase to test nonlinear effects at high incident energy, found that glass-based filters tended to work better than dye-impregnated plastic samples.

However, they stressed that there was no simple rule to follow – and urge those using femtosecond lasers to consider their eyewear choice carefully, by paying close attention to the specific wavelength, pulse duration, and beam diameter that their laser is tuned to emit.

They found that although the majority of the glasses provided for the test performed extremely well in the 745-850 nm wavelength range, optical densities (OD) in some of the filter samples were “inexplicably low” – meaning that they would offer poor protection.

“In these cases, the measured low OD values suggest that these filters are not appropriate for protective safety use,” noted the team in its journal article.

In one extreme case, a filter claiming a certain OD actually provided 10,000 times lower light reduction than specified. Others blocked the specific wavelength for which they were rated, but transmitted much more light at nearby wavelengths. Sidebands at longer and shorter wavelengths could then penetrate the glasses – potentially inducing retinal damage.

NIST also cited the example of one filter that blocked 800 nm wavelength pulses sufficiently well, but whose OD dropped by two orders of magnitude at 847 nm. Many filters did not meet their own specifications when the center wavelength was shifted by around 10 nm, they added.

Heilweil and colleagues also discovered that some filters became damaged under high peak power conditions, after which their effectiveness was compromised. 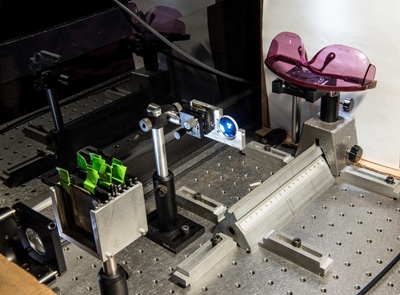 Injury potential
The NIST team says that the eyewear manufacturers who participated in the study on an anonymous basis have all expressed “significant interest” in the results, as well as the planned follow-up with a higher-power oscillator. However, one of the difficulties for those eyewear companies is – as co-author Josh Hadler from NIST’s Boulder campus points out – the high cost of ultrafast lasers.

Hadler and Heilweil say that it would be highly impractical for laser eyewear manufacturers to establish their own femtosecond laser-based test facilities to cover all the potential output conditions of ultrafast systems.

Hadler notes that there are documented incidents of retinal injuries caused by ultrafast lasers, as evidenced by this case study report by a senior optometrist working at the Air Force Research Laboratory from 2013.

Moreover, the relatively recent industrialization of such sources and amplifiers means that they are now finding much more widespread use in both research labs and industrial settings.

“This paper also encourages users to test filters themselves to determine baseline effectiveness of their filter choices,” Hadler said.

“In order to provide adequate eye protection in femtosecond laser labs and commercial environments, utmost care must be taken to analyze the specific spectral content of the laser source,” concludes the NIST team in its paper. “Once obtained, an appropriate filter or eyewear should be selected to provide the maximum protection for that particular laser source.

“Since each laser source may be different and the output spectrum may be tuned, vary during warm-up, or modified for new applications, we strongly [NIST emphasis] suggest wherever possible, that filter materials should be directly tested by the end user for the application and conditions in question.”

Heilweil told optics.org that he hoped the study would inspire new testing and exposure guidelines, adding: “Most importantly, [we hope the results] make users aware that their specific laser output (pulse duration, spectrum) must be carefully considered in order to properly choose protective safety eyewear.”