May 16th proclaimed as recurrent annual celebration of light and light-based technologies.

The United Nations Educational, Scientific and Cultural Organization (UNESCO) has confirmed May 16th 2018 as the first International Day of Light (IDL).

Following the highly successful International Year of Light (IYL2015), during which messages about the science and applications of light are believed to have reached more than 100 million people in a year-long series of events, the IDL will kick off at UNESCO headquarters in Paris with a flagship inauguration featuring Nobel laureates and leaders in areas of education, industry, design and lighting.

We already have 53 National Nodes that will organise local campaigns, activities and events. Check their contact information at https://t.co/l57AEyaK42 #IDL2018

“The proclamation of this annual International Day will enable global appreciation of the central role that light and light-based technologies play in the lives of the citizens of the world in areas of science, technology, culture, education, and sustainable development,” announced UNESCO.

Having already endorsed the IDL in principle more than a year ago, UNESCO officially ratified the day of celebrations at the 39th meeting of its general conference, with gathered last week. Introduced by sponsors Ghana, Mexico, New Zealand and the Russian Federation, it was supported by 27 countries at the assembly, before the May 16 date was confirmed.

As with IYL2015, a critical role in establishing the IDL has been played by John Dudley. The Université de Franche-Comté professor, who last year made a call to follow up the success of IYL2015 by "continuing the conversation" is serving as the steering committee chair for IDL 2018.

IDL activities are overseen by UNESCO’s International Basic Science Programme, under a steering committee featuring representatives from optics.org publisher SPIE, as well as the American Institute of Physics, the European Centres for Outreach in Photonics, the International Commission on Illumination, and industry sponsor Philips Lighting – among several others.

Grants available from SPIE
In its plans to mark the day, SPIE says that it is now accepting applications from members of the society for $3000 grant awards to fund IDL-related projects. The due date for applications is December 15.

And in an effort to continue raising awareness of both the IDL and the vital role that light and photonics technologies play in daily life, the member society is sponsoring an annual International Day of Light photography contest - the inaugural winners are detailed below.

Anne-Sophie Poulin-Girard, a researcher from Université Laval in Canada and also chair of the SPIE Education Committee, said in a release from the society:

“Establishing an annual high-profile day is an unmatchable opportunity for the optics and photonics community to celebrate and to inform others about the role of light in all our lives. On this day, the world will be our stage for demonstrating the many ways in which light-based technologies are essential to a variety of fields, from healthcare to space exploration, to community safety and sustainable energy - just to name a few.”

She adds that activities funded through the IDL “micro-grants” program will engage people in communities all over the world, and says the images collected through the SPIE photo contest will serve as an inspiration to many more.“I hope that each person’s participation will be a reflection of his or her enthusiasm towards optics and photonics,” she said. “Together, this diversity will be a perfect way to celebrate the very first International Day of Light on May 16, 2018.” 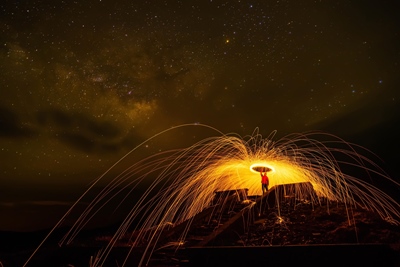 In first place and receiving a prize of $2500 is Rossi Fang from Kaohsiung City, Taiwan, for “Xingxingdiandeng,” a photograph of a shower of fireworks illuminating a hilltop, with the stars of the night sky above.

Daniela Rapavá from Sobota in Slovakia claimed the second-place prize of $1000 for her photo “Let There Be Light”. It depicts the photonic effects created by a frozen bubble of detergent and sugar, illustrating the colorful interactions between light and crystals.

Third place and $500 went to Sudipto Das from Kolkata, India, for “Creating Future”; an image of a woman proudly displaying her solar-powered lamp.

The 2018 version of the SPIE IDL Photo Contest will launch on May 16 next year to coincide with IDL, and run until September 16. For full details, visit the dedicated webpage.