Pre-revenue photonics companies eligible to compete for more than $85,000 in cash, prizes, support and networking. 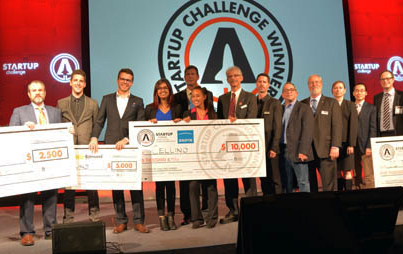 An opportunity for photonics entrepreneurs to meet industry experts - and win prizes.

Aspiring entrepreneurs have until 16 November to apply for an opportunity pitch their light-based technology product ideas to a team of business development experts and venture capitalists — and win a share of more than $85,000 in cash, prizes, and support in the SPIE Startup Challenge 2017.

Organized by SPIE, the international society for optics and photonics, the semi-final and final rounds of the competition are held during SPIE Photonics West at the Moscone Center in San Francisco, California, which next year runs from 27 January through 1 February. Application form and other information is on the SPIE website.

The first-placed winner will receive a cash prize of $10,000 provided by Startup founding partner Jenoptik and $5,000 in products from lead sponsor Edmund Optics. Jenoptik also provides $5,000 for second place and $2,500 for third place, while supporting sponsor Trumpf and brand new sponsor Luminar Technologies fund other prizes in the competition.

Luminar Technologies emerged from stealth mode in April 2017, as the latest lidar company whose sensors would revolutionize the automotive industry. Claiming $36 million of seed financing and a 50,000 square-foot production facility in Orlando the firm was co-founded by photonics industry stalwart and former Ocean Optics executive Jason Eichenholz. Now Luminar’s CTO, he has also served on several occasions as a judge in the Startup competition.

Two semifinalists may win Early-Stage Travel Awards valued at $2,500, good for travel support and full-conference registration for Photonics West. Six finalists, selected by judges in the live round of pitching on 30 January, will also receive the following: 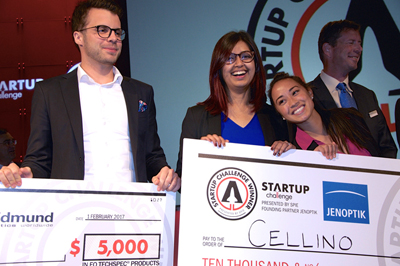 “Part of the value of this competition is that it teaches entrepreneurs about the differences in priority placed on commercialization as compared to academic research,” said Adam Wax, a professor at Duke University who has served as a judge and mentor for several past events. “This understanding is essential for connection with venture capitalists.”

Still a graduate student when she and partner Nabiha Saklayen won in 2017, Marinna Madrid described how the competition accelerated the progress of Harvard University spin-off Cellino Biotech.

"When we applied originally, we didn't even have a company name," Madrid added. "But eight months after winning the competition, we are raising a seed round of funding and finalizing a development agreement with a leading industry partner. Applying to this competition was the best decision for the future of the company, and we encourage other entrepreneurs to do it."

While the money is important, said 2016 winner Leslie Kimerling of Double Helix, "one of the most important benefits is the mentoring, coaching, and advice you get. Probably the most important is the networking and the community that you continue to build."

Feedback from judges who "have been there, have done that," is very valuable, said 2014 winner Robert McLaughlin of the University of Western Australia. "Especially as an engineer, there is a whole world of complexity in going from technical problems to commercialization. They taught me an awful lot about how do I get from an idea to actually turning it into a company where I can get it out into the world and make a difference."

Eligible applicants must present an optics or photonics technology or application as the basis for a viable new business. Because the event focuses on new businesses and potential startups, established companies must be pre-revenue at the time of the competition and may not have sold any products.

Winning projects in the 2017 SPIE Startup Challenge were: