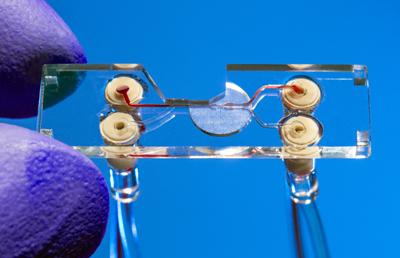 Sorting chip for analyzing and isolating cells in a blood sample.

Biomolecules and cells circulating in the blood carry diagnostic information, the analysis of which makes highly effective, individualized therapies possible. In order to tap this information, scientists from the Fraunhofer Institute for Laser Technology (ILT) have developed a microchip-based diagnostic device.

The AnaLighter analyzes and sorts clinically-relevant biomolecules and cells in a blood test using light. As a result, physicians can make early diagnoses, for example, of tumor and cardiovascular diseases and initiate patient-specific therapies with great efficacy. The Fraunhofer ILT team will be presenting the technology at the Compamed 2017 expo in Düsseldorf, from November 13 to 16. The AnaLighter’s technological core is based on an optically-switchable microfluidic chip, whose optical sensors and switches are connected to the chip via optical fibers.

The “Microchip Based Fluorescence Activated Cell Sorter”, or μFACS, functions in the following way: biomolecules and cells to be analyzed by fluorescence are guided through a microfluidic channel and focused hydrodynamically on a cross-section of 10μm at the site of the optical measurement.

Then laser light from an optical fiber stimulates the analyte in the microfluidic channel to fluoresce. Micro-optics focus the laser light emerging from the fiber into the microfluidic channel, collect the fluorescent light generated there and guide it through optical fibers to the photodetector. This fiber-optic design allows a significant reduction in the installation space and makes the μFACS more rugged compared to previous bioanalyzer designs, says the F-ILT team.

“Fiber splitter technology makes it possible to generate several optical excitation channels from a laser beam cost-effectively,” commented Dr. Achim Lenenbach, head of the Group of Clinical Diagnostics at Fraunhofer ILT. “The advantage of our μFACS lies in its ability to offer patients customized solutions designed for a specific application.” Depending on the application, the Aachen scientists can adapt the AnaLighter technology individually. Using standardized fiber interfaces, wavelengths can be exchanged and adapted to a special measuring task without additional adjustment effort. 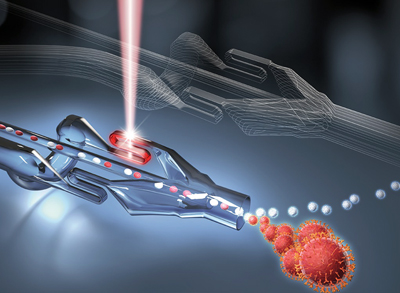 Structure of the sorting chip for sorting cells and particles with laser light.

A noteworthy feature of this technology is its opto-fluidic sorting function. This is based on the fact that the viscosity of a fluid is thermally influenced by infrared laser radiation. By heating the fluid before branching, the system deflects and separates the liquid stream along with the detected analyte before the branching.

In this way, biomolecules or cells can be sorted out and stored in sample containers on the fluidic chip for further investigation. Since the branches are arranged serially, the systems can solve complex sorting tasks for separating different species.

The spectrally separated detection channels of the AnaLighter can simultaneously detect different marker molecules in blood. In such diagnoses, these marker molecules from a blood sample are specifically bound by a mixture of microparticles, each particle species binding exactly one molecule species to be detected.

Thereby in annual routine checks, a general practitioner could detect a large number of possible diseases early in the course of a single blood test in order to prevent widespread illnesses – such as cardiovascular disease.

In contrast to conventional FACS systems, the μFACS technology can also process water-in-oil emulsions in addition to aqueous solutions. A few micrometer-sized aqueous droplets are passed through the fluidic channel in an oily fluid as carrier medium. The aqueous droplets can be used as closed reaction volumes for screening applications in chemistry or biotechnology.

This sorting function also makes it possible to separate out the appropriate candidates from the others during screening, in order to dispose of the relevant gene sequences in e.g. genetically modified variants.