Laser giant says it logged more than $2BN in orders during the fiscal year just completed. 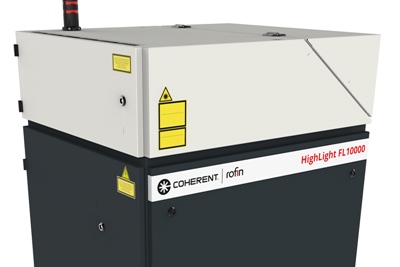 The stock price of Coherent has risen in value by around 10 per cent after the California-headquartered laser company posted news of record-breaking sales and orders in its latest financial quarter.

Long-time CEO John Ambroseo highlighted bookings of just over $2 billion during the fiscal year ending September 30, corresponding to a book-to-bill ratio of 1.18, and noted that the order momentum related entirely to demand from commercial markets.

At $490 million, sales in the latest quarter brought the total for the fiscal year to $1.72 billion – almost exactly double the mark set in the previous fiscal year, since when Coherent has acquired Rofin-Sinar.

The impact of last November's acquisition appears to have translated to the bottom line effectively, with annual net income of $207.1 million up from $87.5 million in the prior year.

“Coherent capped a record-setting year with a record-setting fourth fiscal quarter,” said Ambroseo. “Customer demand over the course of fiscal 2017 was outstanding and resulted in record annual orders of over $2.0 billion.”

OLED display driver
The CEO explained that the order boom was led by applications in the microelectronics sector, where the proliferation of organic LED (OLED) displays in consumer electronics has been prompted by prolonged uptick in demand for Coherent’s excimer laser annealing systems. But demand appears strong across the board.

“The outlook remains positive across the company’s four verticals and sets us up for another strong year from operations,” Ambroseo added, although he pointed out that the addition of Rofin and the relatively low growth of the scientific market in recent years means that this previously much more significant sector now accounts for substantially less than 10 per cent of Coherent’s sales.

Despite that, the CEO said that this would mean no less of a commitment to scientific applications, telling an investor conference call:

“We remain committed to our customers in this space and will continue to innovate in support of scientific discovery.”

In other application sectors, Ambroseo highlighted that the company’s line of high-power fiber lasers was finding good traction in battery welding for electric vehicles, along with larger energy storage systems used for household back-up power.

“The potential for this market is obviously large, with a projected long-term CAGR in excess of 20 per cent,” he said, pointing out the various recent commitments to phase out diesel and gasoline-fueled car engines in the longer term.

Automakers and the industry’s top-tier suppliers are committing capital on the scale of tens of billions of dollars to develop and deploy the coming wave of electric vehicles, the CEO added.

Meanwhile, there could be a wholesale switch away from carbon dioxide lasers for certain future applications in PCB drilling.

Material developments for 5G circuit boards mean that vias will likely be smaller than 50 µm in diameter, he explained, and that size is at the extreme limit of carbon dioxide laser drilling capability. A transition to shorter wavelengths, perhaps ultraviolet sources, could be on the cards – with the need to replace thousands of deployed tools if so.

Laser weapons; plating opportunity
Switching to the medical sector, Ambroseo said bookings were “solid” across the board, and that adoption trends in dentistry, surgical consumables and aesthetics all looked encouraging.

He also pointed to a two-fold rise in bookings from aerospace and defense customers, with the potential for laser directed energy weapons beginning to emerge in a significant way, for example to counter the threat of drone-delivered improvised explosive devices.

Earlier this week, US defense contractor Lockheed Martin revealed that it had won a $26 million contract to build a high-energy fiber laser for an airborne weapon platform – and although it will likely be using internally developed sources, the award suggests that laser weapons are being taken seriously for air, sea and land applications alike.

Looking outside of traditional industrial laser applications, Ambroseo hinted at a potentially very lucrative market in electro-plating applications – where conventional galvanic methods are set to be banned in Europe and China due to the hazardous waste created.

“A high-speed, laser-based process is one of the possible replacements for the galvanic process,” he said. “If adopted, it is a very large opportunity for the laser industry.” 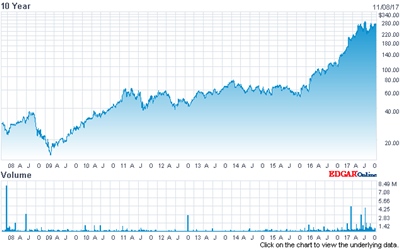 All in all, Coherent’s executives say that the company is poised to deliver another record-setting year. And with plenty of cash being generated, another €75 million of the loan used to finance the Rofin acquisition was paid off in the latest quarter.

The current quarter is expected to a see a slight sequential fall in sales to around $470 million, in line with the historic seasonal trend experienced by the former Rofin business.

But with Coherent’s profit margins looking increasingly healthy, investors were untroubled by that and sent the company’s stock up by around 15 per cent to briefly top $300 when Nasdaq trading re-opened following the earnings release.

Although it settled back a little after that, like many of its peers in the photonics sector the stock continues to trade close to all-time highs. At around $295, it now equates to a market capitalization in the region of $7.25 billion.