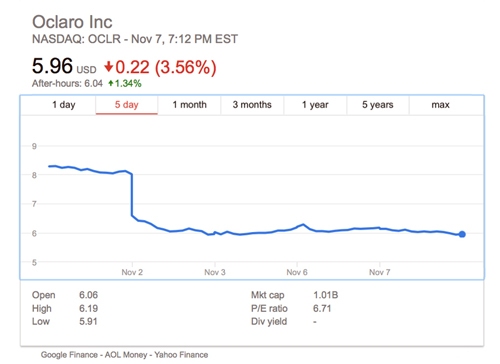 Oclaro’s share price dropped on its forecast for uncertainty in Chinese and data center markets.

The latest quarter’s financial results for optical components supplier Oclaro show revenue up 4% sequentially (over Q4, 2017) and 15% above the equivalent quarter a year ago. But despite the apparent good news, Oclaro’s share price turned down significantly on the company’s forecast for uncertainty in its key Chinese and data center markets.

CEO Greg Dougherty told analysts, “We are currently facing reduced customer demand and some level of market uncertainty. I will like to address the headwinds that we saw last quarter and comment on what we are currently seeing in the market including the low visibility and choppiness that we're experiencing in both China and the data center markets."

He added, “Given our limited visibility, we're not prepared to call bottom for revenue in China. As a result, we continue to expect revenue from China to be flat to slightly down in Q2.

"We believe that revenue growth will resume during the second half of calendar 2018 driven by a 100 gigabit-and-beyond coherent products, our QSP28 and our industrial temperate range 25 gigabit transceivers used in 5G applications."

Giving an overall review of the latest quarter’s business, Dougherty commented, "The Oclaro team has once again produced strong quarterly results, fueled by our CFP2-ACO and QSFP product lines. We generated sequential revenue growth and strong profitability. Despite our reduced outlook, we expect to remain solidly profitable for the December quarter." 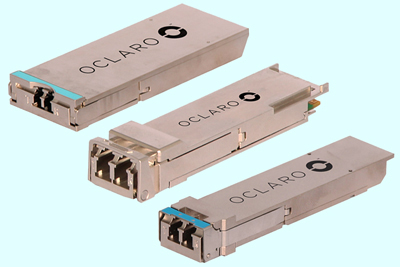 Ocular's strong Q1 results were fueled by its CFP2-ACO and QSFP product lines.

Pete Mangan, Oclaro’s CFO gave the details of the company’s guidance for the next quarter’s likely business: “Our guidance for the second quarter 2018 is that we expect revenues to be between $135 million to 143 million. We expect non-GAAP gross margin to be 36% to 39% and non-GAAP operating income to be in the range of $19 million to $23 million.”

In the analysts’ conference, Dougherty gave further details of how the data center market could impact Oclaro’s sales, “From our Q1 results, our exposure on the data center world, both through direct sales and indirectly through traditional network equipment manufacturers, has grown substantially. 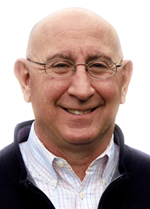 “Unfortunately, we’re also seeing developments in this market, similar to those recently discussed by several other suppliers. In particular, I would like to highlight our near-term lesser visibility and the lumpiness of orders within any given quarter."

He continued, “Despite our reduced revenue guide for Q2, we continue to believe that the fundamental demand growth drivers for fiber optic modules and components remain intact. We still see bandwidth demand coming from preparations for 5G networks, new architectures for MSOs in the metro access space and the continued shift in data centers for 100 gigs.

Dougherty wrapped up with an optimistic overview of the company’s position and prospects: “We remain very confident in our business model and are excited by our products roadmap. While we see the market slowness as short-term phenomena we're committed to maintaining strong financials as we move forward. We believe that we'll be able to maintain our gross margins in the high 30s to 40% and deliver operating income in the teens.”