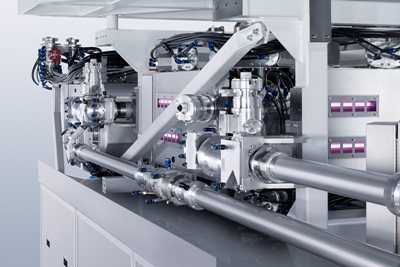 Trumpf says it has acquired a majority stake in US-based Access Laser, explaining that the precision carbon dioxide sources offered by the Seattle company are a critical element in the supply chain for extreme ultraviolet (EUV) lithography equipment.

The Ditzingen, Germany, laser giant has purchased an 85 per cent share in Access, which is headquartered near Seattle in Everett, Washington state. It was co-founded in 1999 by president and chief scientist Yong Fang Zhang and investor Christiane Laakmann. Laakmann was the former owner of Synrad, along with her late husband and Synrad founder, Peter Laakmann*.

Trumpf is one of ASML’s key equipment suppliers for those systems, where a series of high-power laser amplifiers is used to blast tiny droplets of tin in the EUV light source. The approach is complex and hugely inefficient, but has nonetheless emerged as the only viable way to generate the kind of EUV powers needed to pattern silicon wafers in an economical fashion.

Peter Leibinger, now in a new role as Trumpf’s CTO and with responsibility for emerging applications including EUV, said in a company announcement:

“Access Laser is a core partner in our EUV business and a highly innovative laser company. Together, we will be working even closer to further improve the EUV performance as well as serving more applications and customers looking for innovative low-power carbon dioxide lasers.”

In EUV tools, the low-power, high-precision lasers from Access serve as the beam source. Trumpf’s giant amplifiers then ratchet up the laser power to as much as 40 kW before the beam is fired at the tin-droplet source.

Access co-founder Zhang said of the deal: “Access Laser has been a force of innovation since its inception. The successful partnership of technologies of Trumpf and Access Laser in EUV shows the inherent synergy of the two companies. We look forward to enhancing this synergy as a member of the Trumpf Group.”

EUV to LIGO
With a laser portfolio including precision sources with output powers ranging from 100 mW upwards, Access Laser has grown to employ 60 people across its sites in Everett and near Shenzhen in China.

EUV lithography is not the only high-profile application in which Access has been involved. Co-founder Zhang completed his PhD at the California Institute of Technologies (Caltech), and his company’s lasers have been deployed by the Laser Interferometer Gravitational-Wave Observatory (LIGO) – the Caltech-related project whose pioneers have just been awarded the 2017 Nobel Prize in Physics.

In a 2016 interview with Laser Focus World columnist and photonics entrepreneur Milton Chang, Zhang explained that the Access lasers feature in an adaptive system that is used by LIGO to compensate for the thermal distortion of optics caused by the main beam in the ultra-high-precision interferometers.

* Correction (October 10): The original text stated that "Jan Melles, of Melles-Griot fame" was a co-founder of Access Laser. This was incorrect: Melles in fact joined the Access board around five years after the company’s founding, alongside Dr. William Bridges, the Carl F Braun Professor of Engineering, Emeritus at Caltech.