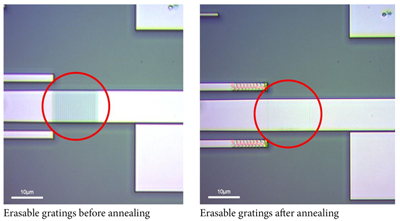 Now you see it... optical microscope images of erasable gratings.

Ahead of exhibiting and making a range of presentations at next week’s SPIE Photonics West expo, Southampton’s Optoelectronics Research Centre (ORC) has highlighted several recent breakthroughs its researchers have made in silicon photonics and fiber lasers.

Companies interested in this technology can get involved via the Southampton-led Future Photonics Hub. Professor Graham Reed, Head of the Silicon Photonics Group at the ORC, commented, “As far as I’m aware, no-one else has this erasable grating capability.”

Emulating the low costs that silicon electronic devices achieve requires photonic devices to be tested directly on silicon wafers. “In an electronic circuit a connection will give you a signal without detracting from performance,” Professor Reed said. “You can’t really do that in optical circuits. You have to take light out of the chip to test it, which is very difficult.” 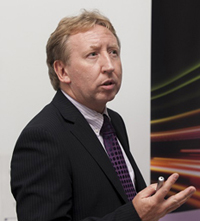 One option is making a permanent grating on the surfaces of silicon photonics chips. However that grating always lets light in or out, potentially affecting the chip’s final performance. Consequently, only the main input and output gratings are used for wafer-scale automated testing.

Professor Reed’s group has developed gratings that can be fabricated using ion implantation and then later erased by laser annealing: “Once we’ve done the testing, we can shine a laser onto that grating, and make it disappear. We can put as many gratings as we like into the circuit, and therefore test any component,” he said.

The Southampton scientists, who first reported this approach in 2014, will next week describe their latest efforts in shrinking the gratings. “These additional coupling points take up space in your circuit, adding cost,” Professor Reed said. “We’re targeting devices that are 100 µm long or less.”

A range of papers detailing the ORC’s exclusive developments in solid state sources, the benefits of new metal-coated optical fibers and progress on novel longer wavelength fiber lasers will also be presented at the conference. 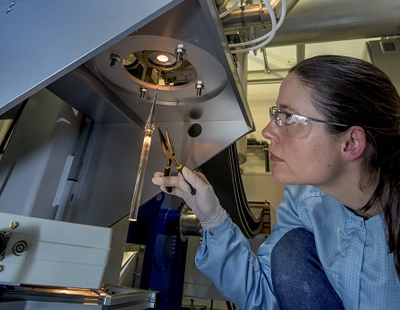 Fiber drawing in the University of Southampton cleanrooms.

“Our motivation here is to develop higher power laser devices,” Professor Andy Clarkson commented. “Fiber lasers and solid state lasers usually have outputs that are not polarised. There are significant advantages in radially-polarised beams, which have a doughnut-shaped intensity profile, in processing applications such as fusion welding or cutting of metals.”

This paper reports on an erbium-doped yttrium gallium garnet planar waveguide, grown by pulsed laser deposition. The key application potential of this development is in the remote monitoring of greenhouse gases, such as CO2 and CH4.

The novel ORC development approach being pursued with the Er:YGG planar-waveguides is attractive, says Dr Jacob Mackenzie, because the emission lines correspond well with the absorption bands of the target gases. Pulsed output and relatively narrow spectral lines are required, which are limiting for fiber-source alternatives.

“To develop this we start with a seed-laser amplified by the Er:YGG, also based on a planar slab geometry, which again allows power scaling. Another aspect of this work, which is very important, is that at Southampton we actually grow the relevant materials ourselves in our bespoke Pulsed-Laser-Deposition facilities,” he said.

Dr Mackenzie added, “One of the sponsors of our work is NASA, who wish to use this monitoring technology in space. Our method does not only have the necessary spectral performance, but it is also scalable to the required powers for operating at earth-orbiting distances.” 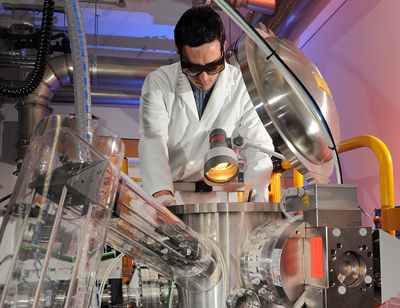 The invited paper Effects of coating thickness on high power metal-coated fiber lasers reports on achievements in power scaling of fiber lasers conducted at the Defence Science and Technology Group (DSTG) in collaboration with the ORC; “The special issue here is about power scaling and effective cooling in very demanding applications such as directed energy weapons,” said Professor Clarkson.

The novelty of this work is that the fiber design has been changed. Traditional fibers for high power lasers use an outer coating of relatively low refractive index polymer cladding. A problem with traditional fiber coatings is that they tend to degrade if heated above 100deg C, which restricts their power-handling capabilities.

The new design overcomes this problem by the use of an all-metal coating, so the fiber resembles a wire. It is coated with pure aluminium to replace the low-index polymer coating. This type of fiber will tolerate higher temperatures up to 400deg C.