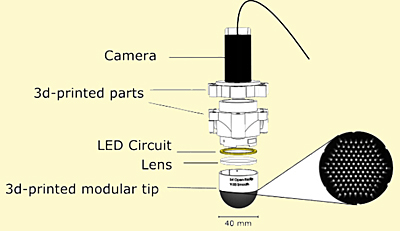 The winners of the 2016 Soft Robotics Competition – including some advanced photonics technologies – were announced this week by the organizer, Harvard University’s John A. Paulson School of Engineering and Applied Sciences.

From low-cost tactile sensors to undersea flapping fins, there were four projects leading each of the different categories, of which the organizer commented, “together they showcase the diversity of this rapidly growing field”.

The UK’s Bristol Robotics Laboratory (BRL) won first prize in the Contributions in Soft Robotics Research category for its TacTip, a 3D-printed optical tactile sensor. The device, which has been under development for more than seven years, acts as a low-cost “artificial fingertip”, which can be easily manufactured and then customized with a 3D printer. TacTip’s developers say these sensors, which can be mounted on robotic arms or hands, “could enable future robots to have human-like dexterity”.

Dr Nathan Lepora, team leader and senior lecturer in robotics and computational neuroscience at the University of Bristol, commented “It is great to know the TacTip project is being recognized and will gain exposure, which could lead other groups to explore applications of tactile sensing within soft robotics. It is also nice to be featured among the other great soft robotics projects in this competition.”

The TacTip meets the need for a cheap, robust, versatile tactile sensor to give robots an artificial sense of touch. The sensor has a unique design in which a webcam is mounted inside a 3D-printed soft fingertip to track internal pins that act like touch receptors inside human fingertips, making it cheap to build and highly customizable.

Dr Lepora added, “An artificial sense of touch is the key for enabling future robots to have human-like dexterity. Applications of artificial touch range from the future robotization of manufacturing, food production and healthcare, to prosthetic hands that restore a sense of touch.”

Benjamin Ward-Cherrier, a PhD student at BRL, said, “TacTip is a cheap artificial fingertip that anyone can build and customize with a 3D-printer, opening up the field of tactile robotics to many more researchers.”

In the College-Level Soft Robotics Design Competition, the team from Worcester Polytechnic Institute (WPI) claimed first prize for their Bio-Inspired Manta Ray Robot. The team developed a fin made from molded silicone that will flap as the channels inside are pressurized and depressurized. The fin is designed to power an autonomous underwater vehicle.

In the High School Design Competition, two winners were named. Aidan Leitch, of Horace Greeley High School in Chappaqua, NY, created a Pneumatic Deformation Sensor, which is a soft air bladder connected to an electrical pressure sensor and microcontroller that provides real-time feedback on how it deforms.

Harrison Young, a recent graduate of Robbinsville High School in Robbinsville, NJ, developed the Fabric-Reinforced Controlled Motion Robot, which uses silicone bladders in a fabric sleeve to mimic the basic locomotive methods of both an earthworm and an inchworm.

The following video shows the TacTip, the winning entry in the Contributions in Soft Robotics Research category.