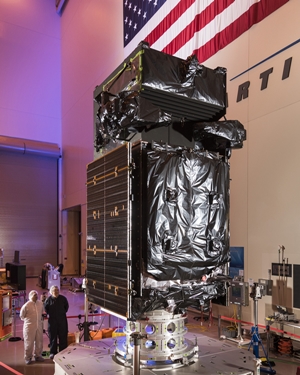 US defense contractor Lockheed Martin says that the third geosynchronous satellite in the US Air Force Space Based Infrared System (SBIRS) constellation, known as “GEO Flight 3”, is responding as expected following its January 20 launch on board an Atlas V rocket.

The payload, which comprises powerful scanning and staring sensors that collect and transmit infrared surveillance information to ground stations, follows the launch of GEO-1 in May 2011 and GEO-2 in March 2013.

With three more launches planned, the completed SBIRS network will feature six geosynchronous satellites to provide complete global coverage, enabling the US military to detect events including missile launches by virtue of the thermal infrared signatures that they produce.

The hardware includes both short-wave and mid-wave infrared (SWIR and MWIR) sensors, gathering raw unprocessed data signals that are then sent to a ground station via a high-speed downlink for processing and analysis.

“With communications now established, our job begins to deliver SBIRS to its final orbit so we can complete deployments and operational testing in anticipation of the satellite's formal acceptance by the Air Force.”

Robert Mehltretter, VP of Northrop Grumman’s military and civil space division, added: “We are looking forward to seeing our sensors capture the first light of real-time world events shortly, and seeing this data delivered to the warfighter will make us proud.”

High priority
According to the United Launch Alliance – a joint venture between Lockheed and Boeing that provides rocket launch services – the latest addition to the SBIRS constellation is considered one of the highest-priority space programs in the US.

GEO-3 is now set to transition to its final location in geosynchronous orbit, where the satellite's solar arrays, light shade and antennas will be deployed to begin early on-orbit testing.

Lockheed says that the SBIRS GEO-1 and GEO-2 sensor pointing accuracy and sensitivity for target detection have “significantly exceed specifications” so far. “While SBIRS' primary mission is strategic missile warning, infrared data will also be made available for new qualified military and civilian applications at the Air Force's recently opened Tools, Applications and Processing Lab in Boulder, Colorado,” the company said.

The next satellite, GEO Flight 4, is set to undergo final assembly, integration and test prior to its planned launch later this year.

Lockheed adds that the final additions to the constellation, SBIRS GEO-5 and GEO-6, which are currently in production, incorporate a new common spacecraft bus that will dramatically reduce costs and cycle times while increasing the potential to incorporate future, modernized sensor suites.

The multi-billion-dollar SBIRS program overran its initial budget estimates significantly, prompting the US Air Force to set up the Alternative Infrared Satellite System a decade ago as a contingency plan. But with the SBIRS project apparently now on track for completion, that back-up plan has been shelved.