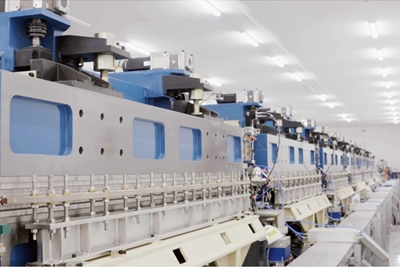 The Dalian Coherent Light Source (DCLS) is said to be the only high-gain FEL user facility operating exclusively in the VUV, and after nearly five years in development it produces a photon flux of 1.4 x 1014 photons per pulse.

Ti:sapphire seed
Led by Led by professors Yang Xueming, Zhao Zhentang and Wang Dong, the Shanghai team began construction of the new FEL in October 2014, two years after publishing details of its scientific foundation in the journal Nature Photonics.

Then in September 2016 the Chinese Academy of Sciences, one of the project’s key financial backers, announced that the main installation phase was complete, and that the DCLS had produced a laser output for the first time.

Having now ironed out some initial bugs in the system, the facility is said to offer “by far” the brightest light source operating across the VUV-X-ray spectrum, between 50 nm and 150 nm.

"VUV FEL light sources have wide applications in the study of basic energy science, chemistry, physics and atmospheric sciences," said team member Yang Xueming, in a release from CAS. “We expect that the new facility will become a new machine for important scientific discoveries and international scientific collaborations.”

In their 2012 paper, the scientific team described the first lasing of an FEL based on their new echo-enabled harmonic generation scheme. And in a 2013 paper written by Wang Dong and published on the open-access arxiv platform, the team describes how the emission of a Ti:sapphire seed laser producing 100 µJ pulses across the 250-400 nm wavelength range could be converted into FEL pulses with optical parametric amplification (OPA).

Smog dynamics
The 50-150 nm spectral region corresponds with electronic transitions in simple molecules and atoms, meaning that the new FEL could be used to probe physical-chemical phenomena like combustion dynamics, or aerosol formation – the latter playing a critical role in the generation of smog in heavily polluted cities including Shanghai.

While researchers have used synchrotron facilities to study such fundamental processes in the past, FELs offer a higher brightness and shorter pulses of short-wavelength light, meaning that more experiments should be completed in equivalent time, while enabling a greater insight into fast processes than is possible with synchrotrons.

According to a report in the journal Science, the FEL facility should be open to users in around two years from now.