Nearly 50 years after their development of low-loss optical fiber technology, representatives of Corning and Bell Laboratories have picked up a Technology & Engineering “Emmy” award for the work from The National Academy of Television Arts and Sciences (NATAS).

Who would have guessed fiber could be so glamorous? Congratulations @CorningOpComm on the Emmy award! pic.twitter.com/PbWJkV6sQM

While fiber-optics has revolutionized communications in general since the 1970 invention, its impact on broadcasting has become more keenly felt with the recent explosion in on-demand programming services.

Corning executive VP Clark Kinlin said in response to the award: “The ability to view high-quality video at any time of the day, from almost any place on a variety of connected and mobile devices, is commonplace today. But it would not be possible without the broad deployment of optical fiber.”

He added: “It’s impossible to imagine the television industry today without the virtually limitless bandwidth capability of optical fiber. It was born in Corning labs in 1970, and our scientists haven’t stopped improving it since.”

Back then, it was the Corning scientists Robert Maurer, Donald Keck, and Peter Schultz who developed low-loss fiber with sufficiently low attenuation to maintain a strong laser signal over long distances.

Coupled with related developments like the production of reliable laser diodes and erbium-doped fiber amplifiers to boost laser signals in long-haul submarine networks, that initial breakthrough helped to solve the problem network carriers faced with the inherent transmission limitations of copper wires.

By contrast, Corning says that today’s fiber lines have sufficient bandwidth to stream two million high-definition videos at the same time – and points out that because wireless signals must interconnect with a physical network, optical fiber has become the key element in a world where streaming media on the move has become commonplace.

According to the IET, it was the 19th-century electrical engineer Willoughby Smith’s work on the photoconductivity of selenium that led to William Siemens’ demonstration of the first “artificial eye” in 1876 – arguably the earliest incarnation of today’s television cameras. 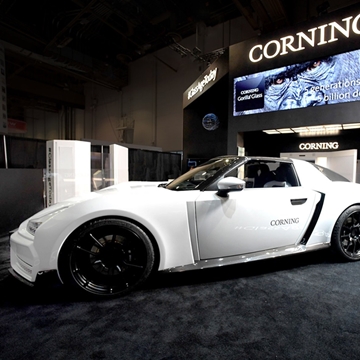 Tim Hamer, the IET’s “director of knowledge”, said: “The discovery and invention of the first television camera has been pivotal to the history of the television industry and transformational in terms of human communication.”

Gorilla Glass at CES: from phones to cars
While in Las Vegas to receive the Emmy Awards, Corning also took part in the CES exhibition, showing off the latest applications of its glass and optical technologies.

Those innovations included a “glass-enabled concept vehicle”, featuring a lightweight Gorilla Glass hybrid windshield coupled with augmented reality technology – one of the key trends at this year’s CES event.

While Gorilla Glass has been a feature in mobile handsets for a decade, Corning’s executive VP and “innovation officer” Marty Curran said: “Corning’s leading position in mobile device cover glass has provided an excellent launch pad for glass solutions enabling smart-phone like connectivity in cars.

"We are excited to be demonstrating all of these new technologies and opportunities in a custom-built connected car, shown for the first time at CES.”