System developed by US-based Monteris Medical will be trialed on most common and deadliest type of primary brain tumor at five clinical sites. 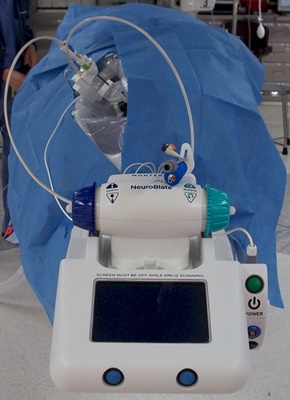 Minnesota-based Monteris Medical says that its “Neuroblate” laser system has been approved for a clinical study on patients with a particularly aggressive, and otherwise inoperable, form of brain cancer.

The firm, which agreed a $10 million loan deal with Oxford Finance in July, announced that the US Food and Drug Administration (FDA) approved an Investigational Device Exemption (IDE) to evaluate the system in patients newly diagnosed with glioblastoma multiforme (GBM).

Monteris will now embark on a feasibility study across five clinical sites in the US, with the first patients set to be enrolled later this year. The study should be completed by the end of 2019.

YAG laser system
The NeuroBlate technique is a form of laser interstitial thermal therapy, based around an Nd:YAG laser and guided using magnetic resonance imaging. It can be used to ablate, necrotize or coagulate soft tissue, and Monteris says the system has been used in more than 800 patient procedures since initial FDA approval back in 2013.

The company has previously conducted a similar study on patients with recurrent GBM, and has also gained approval to evaluate the laser system for treating patients with “medically refractory” epilepsy - where drugs are unable to control seizures.

According to Monteris GBM is the most common and deadliest type of primary brain tumor, while the American Brain Tumor Association describes them as “highly malignant”, because the tumor cells reproduce quickly and are fed by a large network of blood vessels.

The disease occurs most commonly in adults between the ages of 45 and 70, accounting for slightly more than half of all primary brain tumors. The American Association of Neurological Surgeons (AANS) describes this particular type of cancer as “devastating”. The five-year relative survival rate for GBM is low, ranging between 4 per cent and 17 per cent and decreasing with the patient’s age.

Minimally invasive
The feasibility study should tell surgeons whether or not some promising preliminary data actually translates into better care and outcomes for patients.

According to Eric Leuthardt, M.D., a professor of neurological surgery at Barnes-Jewish Hospital and director of the Brain Laser Center at Washington University School of Medicine, new GBM treatments are “desperately needed”.

Leuthardt adds that the Monteris system may have extra benefits because of its minimally invasive approach, compared with the open craniotomies typically employed.

GBMs are surrounded by a zone of migrating, infiltrating tumor cells that invade surrounding tissues, which the AANS says makes it impossible to ever remove the tumor in its entirety.

And according to Kris Smith, M.D., a practicing neurosurgeon at the Barrow Neurological Institute in Phoenix who was quoted in a Monteris release, such surgery is not even an option for patients with deep-seated tumors that are sited close to critical areas of the brain.

He said: "Data from a preliminary first in-human study evaluating laser thermotherapy to treat recurrent GBM demonstrated clinical potential and we expect ongoing research will help us better understand how patients with newly diagnosed GBM respond to this type of intervention."

Unmet needs
Monteris says that the so-called “FLAG” study will enroll participants for whom a complete surgical resection is unsafe because of the location, shape or size of the tumor. According to the CinicalTrials.gov entry for the study, NeuroBlate will be tested on adults with untreated GBMs measuring between 1 cm and 4 cm.

Daryle Petersen, the VP of clinical affairs at Monteris, said: “Monteris Medical is committed to addressing unmet medical needs by evaluating new options for patients with severe neurological disorders, and the IDE process enables us to do so in a carefully regulated, clinically rigorous environment.

“We are optimistic that results from the FLAG study will expand our knowledge of LITT in this patient population.”