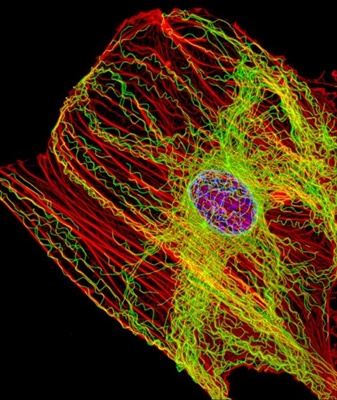 by Ford Burkhart
Monitoring the biological processes inside living cells as they occur, at the molecular level, can be done with more precision than ever by combining “super-resolution” techniques that overcome the fundamental limits set by the wavelength of light with a computational algorithm.

The breakthrough spans cellular and molecular biology, and could help drug discovery by advancing the understanding of how cells respond to drugs.

In 2014, the Nobel Prize in Chemistry was awarded for early work on such microscopes, and since then the scientific community has been trying to push the resolution envelope even further, and develop techniques suitable for live cell imaging.

Now a collaboration between the Faculty of Engineering and the Institute of Nanotechnology and Advanced Materials at Bar-Ilan University in Israel (led by Prof. Zeev Zalevsky) and the Photonics Laboratory at the University of California, Los Angeles (UCLA) in the US (led by Prof. Bahram Jalali) has demonstrated a new way to enhance molecular-level imaging in live cells by combining a recently introduced computational imaging algorithm with these microscopes.

The algorithm, known as the phase stretch transform (PST), can reveal features that would otherwise be undetectable.

Better speed and resolution
The research, published in the online journal Biomedical Optics Express last week, describes a way to sharply increase both the speed and resolution of molecular imaging. To image live cells in real time and beyond the diffraction limit of light, the team applied the new algorithm to PALM (photoactivated localization microscopy), one of the super-resolution techniques based on fluorescence microscopy.

Super-resolution microscopy can show the position of individual molecules with nanometer-level accuracy by taking multiple images of the same scene and computationally combining them.

The accuracy improves with the number of images, however the image acquisition time and computational time become longer, reducing the speed whenever high accuracy is needed. Also, only sparsely populated samples can be imaged - otherwise nearby molecules overlap in the image. These limitations pose a challenge for real-time live cell tracking.

Zalevsky's research also focuses on the fields of biomedical imaging and super-resolution, as well as nanophotonics. The lab, near Tel Aviv, includes about 40 graduate students and research assistants, including Tali Ilovitsh, a postgraduate student from the team and lead author on the latest work.

The PST is a computational approach for image enhancement that emulates propagation of light through physical media with particular dispersive properties. The algorithm was invented in Jalali's UCLA lab and has been made available on the open-source platform Github.

The algorithm has its origin in the photonic time-stretch technique, an optical slow motion method that has previously led to the discovery of optical rogue waves and label-free detection of cancer cells using artificial intelligence (see the UCLA team's Nature Photonics paper).