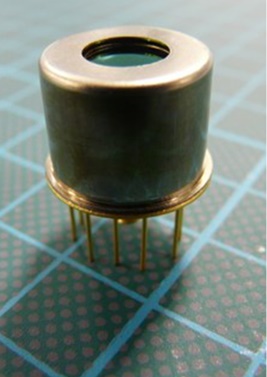 A central-European research collaboration has produced a 64-pixel quantum cascade detector (QCD) that they believe could find use in portable gas imagers .

Similar in terms of their semiconductor composition to quantum cascade lasers (QCLs), the sensitive QCDs designed by Andreas Harrer from the Vienna University of Technology (VUT) and colleagues in Switzerland and Germany operate at 4.3 µm, in the mid-infrared region.

The detector was tuned to that wavelength because it corresponds with a carbon dioxide absorption line, with the team suggesting that the technology could be used in a gas-specific detector, perhaps in robot-assisted search and rescue efforts.

Although it can only be tuned to operate at a specific wavelength, the big advantage of the cascade design is that it operates at room temperature – meaning that no bulky cooling equipment, usually a requirement for mid-IR detectors, is needed. Instead, the devices can be packaged in the form of a conventional photodetector, with the team using a 16-pin TO-8 housing can in the current work.

Field-applicable
Harrer said of the work: “We want to pave the way to an infrared detection technology which is flexible in design and meets all requirements for compact integrated field-applicable detection systems.”

He believes that it will be easy to scale up the number of pixels in the array, by shrinking the pixel dimensions from their 110 µm size in the current prototype version. In fact, he says that this step will be essential to achieve cost-effective, high-resolution imaging in the future.

Publishing the work in the open-access journal Optics Express, the Vienna-led team write that they made the QCD using molecular beam epitaxy on a semi-insulating indium phosphide substrate. 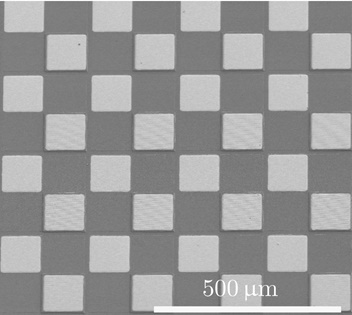 Based on a Monte-Carlo simulation originally developed for QCLs, the device design yielded the kind of narrow spectral detection needed for the sharp absorption peaks of gases.

“Remote sensing would benefit from spectrally narrow detection as provided by QCDs and provide additional scene information based on the design wavelength and the thereby detectable substances such as carbon dioxide,” concludes the team in its paper, adding that pixel performance could be boosted by improving the gold diffraction grating structure used.

• VUT spin-off QuantaRed Technologies, which specializes in QCLs for chemical sensing, is part of the wider European Union-backed "MIRPHAB" pilot line project dedicated to mid-IR sensor development. Major industrial player Bosch is among the partners involved in the public-private consortium.