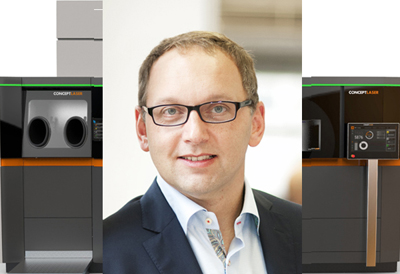 On the up: Frank Herzog, President & CEO of Concept Laser.

Concept Laser, a developer of laser-based systems for 3D printing of metal components, says it has achieved “record trading figures” for the first half of 2016. The management of the company added that “the transition to industrial series production has really taken hold in a number of sectors, notably aerospace and medical”.

Concept said the aerospace industry in particular was the key market, but added, “although other sectors too are increasingly committed to 3D metal printing”. Without specifying any figures, the privately-held company claimed that system sales “are continuing to perform very well,” adding, “in 2016, we saw an 88% increase in our sales compared to the same period of 2015.“

Frank Herzog, President & CEO of Concept Laser, said, “The transition to the industrial series production of additively manufactured metal parts is increasingly stimulating our growth. From the end of 2016, the next logical step will then be the commercial launch of our new machine architecture.”

Concept says its sales growth is also supported by manufacturers upgrading their suites of machinery in order to able to meet “the great demand for additively manufactured metal parts”. In addition, Concept’s multilaser technology and the X line 2000R, which claims to have the world’s largest build envelope for powder-bed-based laser melting with metals, are making their contribution. The growth path has also been reflected in the number of Concept employees, which has risen to 190 (as of June 30, 2016). Concept Laser added it also expects sales to exceed their target for the second half of 2016. 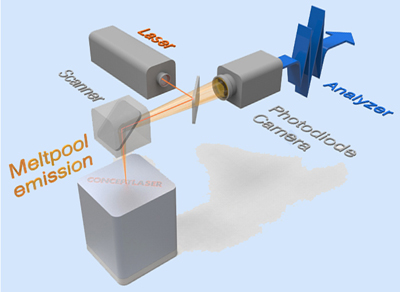 Concept Laser added that in-situ process monitoring has been one of the key strategic fields of technology development since 2004, long before the 3D printing market was demanding such a solution. This approach resulted in the launch of QM Meltpool 3D, the first process monitoring tool of its type which received the “International Additive Manufacturing Award 2016” at Metav 2016.

QM Meltpool 3D provides quality-relevant data for process monitoring and documentation in real time, which is essential for precise part manufacturing and qualification in particular for the aerospace and medical technology sectors. The system records positional characteristics of the meltpool while the part is being created. This data can be visualized on a three-dimensional map and analyzed by the user.

Herzog commented that the company’s next milestone will be, from the end of 2016, the commercial availability of the new machine architecture based on the vision of the AM Factory of Tomorrow, first described in November 2015.

”In future, there will be stand-alone process stations for the build process with a build envelope of 400 x 400 x >400 mm³ which will have up to four laser systems featuring multilaser technology with 400W to 1,000W laser sources,” he said. “There is also a new two-axis coating process allowing the return run of the coater to be performed alongside the exposure. This results in a considerable time saving during the coating process.”