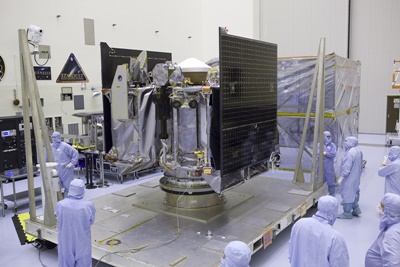 A NASA mission to investigate an asteroid in unprecedented detail with a variety of photonics-based equipment is set to launch September 8 from Cape Canaveral in Florida.

Kitted out with a lidar altimeter, visible-IR spectrometers and a trio of cameras, the “OSIRIS-REx” mission (short for Origins, Spectral Interpretation, Resource Identification, Security-Regolith Explorer) is aiming to generate new insights into planet formation and the origin of life on Earth.

Arizona scientists are heavily involved in the mission, with Dante Lauretta from the University of Arizona in Tucson heading things up as principal investigator. "The launch of OSIRIS-REx is the beginning a seven-year journey to return pristine samples from asteroid Bennu," said Lauretta. “The team has built an amazing spacecraft, and we are well-equipped to investigate Bennu and return with our scientific treasure.”

Survey then sample
Assuming a successful launch, the mission is scheduled to begin its final approach to asteroid “Bennu” in August 2018. After a year-long survey from orbit using the optical equipment, it will then briefly come into contact with the asteroid to retrieve a sample that will be brought back to Earth for more detailed analysis.

“The sampling arm will make contact with the surface of Bennu for about five seconds, during which it will release a burst of nitrogen gas,” says NASA. “The procedure will cause rocks and surface soil to be stirred up and captured in the sampler head.”

The spacecraft has enough nitrogen to allow three sampling attempts, to collect between 60 and 2000 grams from Bennu. Departure from the asteroid belt is then scheduled for March 2021, with touch-down back on Earth expected in September 2023.

Among the five on-board scientific instruments is a camera suite built by team at the University of Arizona. It features three different cameras: the “MapCam” to generate a four-color map of the asteroid surface; the “PolyCam” 8-inch telescope to image Bennu from 2 million kilometers and generate high-resolution images; and the “SamCam” for rapid imaging and checking the sample collector used to grab a chunk of the surface. 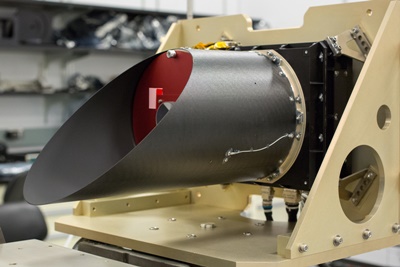 Lidar map; thermal spectrometry
Other optics-intensive tools include a laser altimeter featuring a lidar scanner, built by the Canadian Space Agency. It will carefully monitor the distance between OSIRIS-REx and Bennu, and also produce a detailed three-dimensional relief map of the asteroid.

Another Arizona team developed the craft’s thermal emission spectrometer (see left), which will provide mineral and temperature information by observing the thermal infrared spectrum. It was built by an Arizona State University group in Tempe.

Meanwhile NASA’s Goddard Space Flight Center is responsible for the visible and infrared spectrometer that will seek to identify minerals and look for any signs of organic material that could give clues to the origin of life.

The final piece of scientific kit on board OSIRIS-REx is an X-ray spectrometer built by a Harvard-Massachusetts Institute of Technology collaboration that will be able to identify and quantify the abundance of chemical elements on the space rock.

Contractor Lockheed Martin Space Systems built and tested the space craft, and also developed the articulated robotic arm that will be used to grab a sample from Bennu’s surface during the mission – as well as the return capsule that will use a heat shield and parachutes to bring that sample back to Earth safely and without contamination.

• Shortly after the OSIRIS-REx launch, the "Rosetta" space craft currently in orbit around comet 67P/Churyumov-Gerasimenko is scheduled to set down on its host and complete the mission with a final burst of data acquisition.

The "Philae" lander, dispatched from Rosetta, is already on the comet surface but ran out of power more quickly than was hoped after bouncing around 67P upon landing and falling into a position that made it difficult for its solar panels to generate more charge.

On its final approach to 67P, Rosetta may capture a glimpse of Philae in its final resting place: although the lander's mission was cut short, project scientists say that they were able to record plenty of scientific data before the batteries went flat.