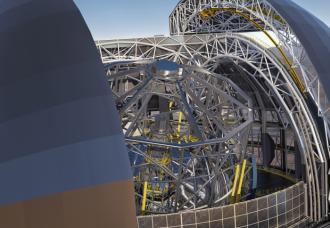 Extremely large: the E-ELT mirror will be 39 meters across

When the European Extremely Large Telescope (E-ELT) enters operational service at Cerro Amazones in Chile's Atacama desert, scheduled for 2024, adaptive optics (AO) will be crucial to its hunt for exoplanets.

In the E-ELT - as with other advanced ground-based telescope systems - AO is needed to counteract the disturbance to incoming light caused by atmospheric turbulence, which will otherwise overwhelm the subtle optical indications of exoplanets orbiting their stars.

AO involves deliberately deforming a telescope mirror to just the right carefully controlled degree so as to counteract the atmosphere's distortion, and the Fraunhofer Institute for Applied Optics and Precision Engineering (IOF) in cooperation with Physik Instrumente (PI) is developing a new actuator concept intended to give the E-ELT the clearest possible view.

"One of the most important tasks of the telescope is to help us to find out more about exoplanets: planets that exist beyond our solar system", explained Stefan Ströbele, system engineer and project manager at ESO, which will operate the new telescope.

To glimpse them, a highly sensitive camera and a spectrograph are required for imaging and analysis of the planets' atmospheric composition, and the AO system - in this case an "extremely accurate adaptive optics" or XAO system - will be an integral part of compensating for wavefront distortion during this analysis. The aberrations will be measured in real time, processed, and transformed into corresponding signals for the piezo actuators in the deformable mirror.

Multi-layer piezo actuators
Since the E-ELT primary mirror will be 39 meters in diameter, composed of 798 hexagonal segments each 1.45 meters across and 50 millimeters thick - making it the largest terrestrial telescope for scientific evaluation of electromagnetic radiation in the visible and near-infrared wavelength range - the demands on those piezo actuators acting on each segment and deforming the mirror to order are considerable.

IOF has announced that the Fraunhofer Institute in Jena will supervise the development of an array of up to 11,000 discrete piezo actuators, integrated into one overall system for the E-ELT. The actuators themselves will be derived from Physik Instrumente PICMA products, a range of multi-layer piezo actuators whose active layers consist of thin ceramic tapes.

According to the company, the PICMA design includes sintering the internal electrodes and the piezo ceramic together in a proprietary cofiring operation, resulting in a monolithic piezo ceramic block. The procedure laminates multiple individual strips of piezoceramic material to form an initial piezo element, which is then sintered together with contact electrodes in a single process step.

This is designed to give the actuator an all-ceramic outer layer, able to act as insulation and also to help in retaining stability under high dynamic loads. PICMA components are capable of reliability and lifetimes ten times higher than that of conventional multi-layer piezo actuators, according to PI.

An ESO video on the E-ELT design: