Microsoft’s 'Azure' cloud business among first customers as technology platform is commercialized after 16 years in development. 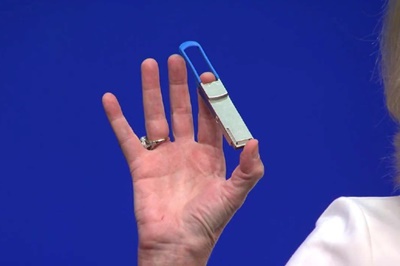 Intel says it has started shipping silicon photonics products based around a hybrid indium phosphide/silicon laser, and says that it expects the technology to eventually feature “everywhere” in data centers.

Officially launching the platform at this year’s Intel Developer Forum in San Francisco, Intel’s general manager of data centers Diane Bryant claimed that the Californian chip giant was the only company building its silicon photonics around a laser directly integrated into the material.

“We are the first to light up silicon,” she said, adding that products had been shipping since June. “We integrate the laser light-emitting material, which is indium phosphide, onto the silicon and use lithography to define the laser, to align it with precision.”

Cost, reach and density advantage
Bryant says that this yields a cost advantage versus other approaches to silicon photonics, which can involve tricky manual alignment, as well as longer reach and higher density.

But she admitted that it had taken Intel a long time – 16 years to be precise – to transfer the technology from its research laboratories and into a full-blown product. “All good things take patience,” she said in her keynote address. Back in 2010, Intel's Mario Paniccia told optics.org the discovery that silicon could act as an effective microcavity was a key achievement.

The target customers for the technology are the “big seven” operators of data centers, with Bryant pointing out that the seemingly unstoppable rise of cloud computing is driving a huge increase in demand for data communication capacity.

“Data center traffic is doubling every 12 months,” the Intel executive claimed, adding that the rise of cloud services means that data centers now handle five times as much traffic as the conventional Internet.

That traffic is handled by more traditional forms of fiber-optic technology, but Bryant said: “Fiber optics is very expensive. Nearly 50 per cent of total network cost is optics, and that percentage is growing.” 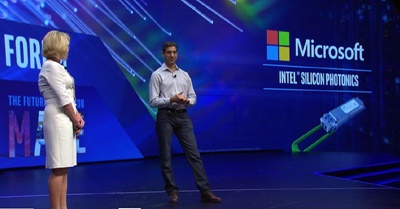 Microsoft on board
To reinforce that message, she was joined on the forum stage by Kushagra Vaid, general manager of hardware engineering at Microsoft Azure, the computing giant’s cloud services business and one of the first adopters of the silicon photonics technology.

Vaid said that the server bandwidth requirements in data centers has risen from 1 Gb/s in 2009 to 50 Gb/s currently, indicating the rise and rise of cloud networking.

But there’s a big problem looming. “As data rates increase to 100 Gb/s, we are going to hit a brick wall,” Vaid said. “There is no way copper can scale beyond 100G, it’s already getting difficult at 25G over [distances] of a few meters.”

“Everywhere in the data center”
Initially that deployment will be at the rack level, to support the move to 100G interconnectivity. But the best part, Vaid said, was that silicon photonics would enable data centers to scale to much higher bandwidths in the near future.

Bryant reckons that while Intel’s customers will initially deploy silicon photonics to connect servers in data centers, this will only represent the very first application.

“We see a future where silicon photonics and optical input/output is everywhere in the data center,” she said. “And then integrated into the switch and the control of silicon.” 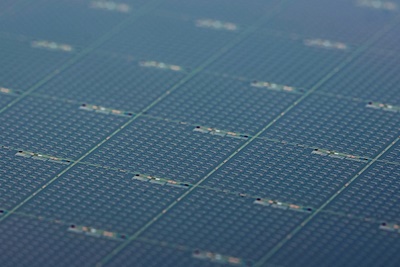 Earlier this year, analysts at the market research company LightCounting reported that global sales of products based on silicon photonics would grow relatively slowly in the short term, potentially reaching $1 billion by 2020 - although after that, it could become disruptive.

Aside from Intel, key players include Ciena (through its recent acquisition of Teraxion), Cisco Systems, Kaiam, Luxtera, Adva Optical Networking, IBM Research, and Mellanox, among others. The technology is also the subject of numerous development projects at the national and international level, while the US-based AIM Photonics program is working to advance integrated photonics technology on a silicon wafer platform.