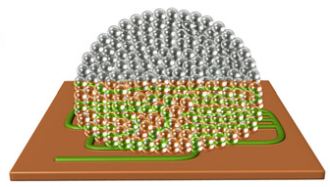 Most metamaterials to date are based on metallic resonant structures, but a project led by Zengbo Wang at Bangor University, UK, and Limin Wu at Fudan University, China, has now developed an all-dielectric alternative.

It was manufactured from 15-namometer titanium dioxide nanoparticles using a new "nano-solid-fluid assembly" method developed by the project, and the work was published in Science Advances.

In use, the new 3D metamaterial-based solid immersion lens (or mSIL) was able to produce a sharp image with a resolution of at least 45 nm under a white-light optical microscope. The team commented that this significantly exceeded the classical diffraction limit and the performance of previous near-field imaging techniques.

The appeal of an all-dielectric metamaterial lies in the potentially much lower intrinsic losses at near-IR and visible frequencies than metallic equivalents usually demonstrate. In its paper, the team note that this is thanks to the near-field coupling between transparent high-refractive-index dielectric building blocks, which enhance and confine the optical field as required but with much lower energy dissipation.

Revealing Blu-ray data
Manufacturing the lens involved first the creation of a "nano-solid-fluid," in which titanium dioxide nanoparticles are effectively held in a confined liquid interface between an aqueous and an oil phase of suitable solvents.

Once prepared, this can behave as a plastic solid, and be moulded into desired 3D shapes by spraying it onto a sample surface and then removing the solvents, leaving densely packed nanoparticles behind. Adjustments to the process allowed the creation of both hemispherical and super-hemispherical geometries.

"We have used high-index titanium dioxide nanoparticles as the building element of the lens," commented Wang. "Each sphere bends the light to a high magnitude and splits the light beam, creating millions of individual beams of light. It is these tiny light beams which enable us to view previously unseen detail."

To test the super-resolution capabilities of the lens, the project used it to examine a semiconductor wafer, and then the 100-nm-wide grooves of a recordable Blu-ray disk. When a super-hemispherical lens was used in combination with a high-resolution CCD camera, the system was able to discern 45-nm features in the Blu-ray grooves, their presence revealed by the reflectivity patterns that the lens detected.

"The mSIL enables direct observation of the nanoscale patterns of recorded data that are stored in the grooves, seen as a difference in reflectivity that cannot be detected even by scanning electron microscopy," noted the team in the SA paper.

The manufacturing principles developed for the new lens could lead to compact and inexpensive nanophotonic devices for cloaking, optical interconnect networks, near-field sensing and solar energy utilization, while future mSIL lenses may offer valuable new imaging capabilities for a number of biomedical applications.

"We have already viewed details to a far greater level than was previously possible," said Wang. "The next challenge is to adapt the technology for use in biology and medicine, where it could remove the current need of dyes, stains and laser light to view samples. The new lens will be used to see germs and viruses not previously visible."

• The new mSIL lens is a development of Zengbo (James) Wang's previous work on microsphere-based super-resolution white-light nanoscopy, including the development of what is said to have been the first commercially viable superlens prototype product for use with existing microscope systems. In 2015 he was selected to participate in the Welsh Crucible program, which aims to develop the future research leaders of Wales.