Earnings up at steady Jenoptik 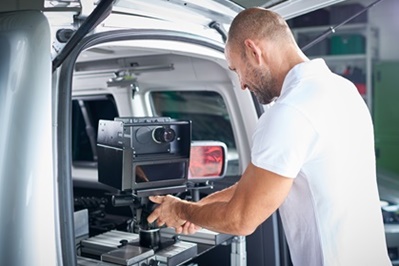 Jenoptik has reported typically steady growth in sales and earnings in its latest financial quarter, with the company’s “optics and life science” business segment making a strong contribution.

Although the Jena, Germany, company’s overall revenues ticked down slightly to €168.7 million in the three months ending June 30, sales attributed to the optics and life science division rose 4 per cent compared with the same period last year, reaching €55.9 million.

The same division was also the largest contributor to pre-tax earnings of €18.3 million, and for the first half of this year reported an 18 per cent rise in orders to €113.6 million.

Retinal disease treatment
Jenoptik revealed in June that it had received an $11 million order to supply diode-pumped thin-disk lasers for a medical application in the US. The “JenLas D2” sources are frequency-doubled Nd:YAG lasers operating at 532 nm, and will be used in retinal disease therapy. The company says that the order will be fulfilled over the next three years.

The company realigned its three business divisions at the start of 2016, and a large chunk of its photonics-related activity now falls under the “mobility” segment – including lasers used in machine tools for car production.

As reported earlier in the summer, Jenoptik is currently making its single largest investment in Rochester Hills, Michigan, where it is spending $15 million on a new technology campus for metrology and laser machines for the North American auto industry.

With 2016 progressing well so far, Jenoptik’s executive team has firmed up its sales guidance for the full year. CEO Michael Mertin and his colleagues are confident of posting revenues somewhere between €680 million and €700 million, which would represent moderate growth on last year’s total of €668.6 million. Group earnings are expected to rise roughly in line with those sales.

Mertin has previously set a target to grow Jenoptik’s sales to €800 million by 2018, although that could result in part from acquisitions. In its latest financial update, Jenoptik said of its 2016 expectations: “Acquisitions are not included in this forecast but have not been ruled out for the current fiscal year.”

Traffic cameras bound for Australia
Last week Jenoptik said it had received another substantial order for traffic monitoring cameras. Western Australia’s police will install an initial batch of 81 camera systems over three years, in a deal valued at around €20 million – an amount that could double if an option to extend the program is taken up.

Although the “TraffiStar” cameras, which can use either radar or laser detection, will be manufactured at Jenoptik’s facility in Monheim am Rhein in Germany, the deal will also see the company expand its team in Perth to boost local on-site service.

And in another substantial recent deal - albeit one that does not feature photonics technology - Jenoptik is set to provide power supply, converter, aluminum chassis, and spare parts for the well-known Patriot missile defense systems.

• Though it appeared unmoved by the company’s latest financial results, Jenoptik’s stock price is currently trading close to a decade-long high on the Frankfurt exchange. At €15.38, the firm commands a market capitalization of around €880 million.