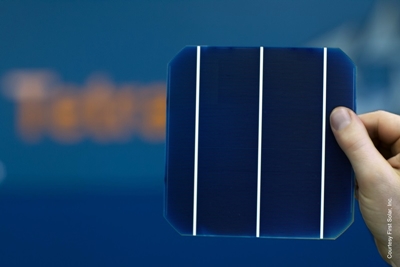 The Tempe, Arizona, firm had acquired TetraSun – then a start-up company – back in April 2013, seeing the bifacial, high-efficiency silicon technology as a good option for space-constrained rooftop sites. Japanese cities were regarded as an ideal location for the modules.

The technology also served as a contingency plan if the development of CdTe cells or modules did not go according to plan, but First Solar has reported rapid progress on that front in recent years and set another record-breaking mark with a 22.1 per cent efficient research-grade cell in February this year.

The company’s COO Tymen de Jong said: “TetraSun is a sound technology for space constrained rooftops, and served largely as a hedge against CdTe technology competitiveness that had challenged us in the past.

“With the success of our CdTe roadmap reflected in our record 22.1 per cent cell efficiency, along with the proven higher energy yield and superior performance inherent in our thin-film technology, that hedge is no longer needed.”

The decision will cost First Solar around $100 million in mostly non-cash charges as it writes down its investment in TetraSun. Production capacity at the firm’s Kulim, Malaysia, facility – where TetraSun modules are currently produced - will be re-allocated to assemble the new “series 5” CdTe modules.

CdTe efficiency push
The switch comes just a few days after Mark Widmar took over as the company’s new CEO. The accountant, who has been First Solar’s CFO for the past five years, has replaced Jim Hughes, who steered the firm through a tumultuous period of fierce price competition from Chinese competitors – several of whom have since gone bankrupt – and massive cuts to PV subsidies in Europe, particularly in Germany.

Since Hughes took over in early 2012, the average efficiency of the CdTe-based modules manufactured by First Solar has risen from 12.4 per cent to 16.2 per cent in the opening quarter of this year.

CTO Raffi Garabedian had been expecting module conversion efficiencies of 20 per cent to start rolling off the most advanced First Solar production line by 2017, with a series 6 module capable of 400 W output also in the pipeline, up from the series 5's 365 W.

Meanwhile in the laboratory, First Solar’s researchers have pushed the performance of the best research-grade CdTe cells from just over 16 per cent in 2012 – a figure that had changed little in two decades – to the 22.1 per cent mark achieved in February.

In contrast, the best crystalline silicon cell efficiencies have been static since the 1990s, while perovskite has emerged as a potential game-changer in just the past couple of years. Although no commercial PV perovskite cells or modules are yet available, the best-performing small-scale cells can already match the 22.1 per cent figure set with CdTe.