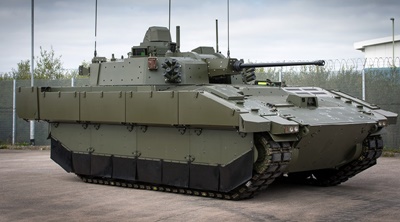 UK-based optical component and systems firm Gooch & Housego (G&H) has made a significant move to diversify and expand its aerospace and defense offerings, acquiring both Kent Periscopes and Alfalight.

The pair of deals - which will cost G&H around £10.5 million in total - is set to add around £9 million to the company’s annual sales, with both the acquisitions expected to boost profitability.

Earlier this year Kent – which, despite its name, is based at the optics-focused St Asaph Business Park in North Wales – signed a £9 million deal to supply Lockheed Martin’s UK division with periscopes and sights for a turret that will feature on the British Army's new “AJAX” armored vehicle. Its order book is also said to be worth in excess of £20 million.

G&H CEO Mark Webster said in a statement to the London Stock Exchange: “Kent is a well-established business with an impressive list of international blue chip customers. We believe that G&H will enable this business to fulfil its true potential through leveraging our greater global reach and our complementary technological capabilities.”

Like its new owner, Kent Periscopes also won a Queen’s Award for Enterprise this year, in recognition of its growth in exports. The company currently employs around 50 people, all of whom will now transfer to G&H.

Al-free laser diodes
Founded back in the late 1990s, Wisconsin-based Alfalight was originally known for its development of resilient laser diode structures based on aluminum-free semiconductor structures (hence the ‘Alfa’ part of the company’s name).

For the past few years, the firm has focused on defense-related laser applications, and in 2013 sold its diode manufacturing facility and commercial product lines to Phoneix-based Compound Photonics.

Fourteen Alfalight staff are transferring to G&H’s US subsidiary in Boston as part of the deal, along with all equipment, intellectual property and product lines. However, long-standing CEO Mohan Warrior and CFO Aaron Marshall are not making the switch*. G&H’s CEO Webster said:

“Alfalight’s expertise in diode lasers in the US defense sector is an excellent fit for our Boston business and will enable it to establish a critical mass in this marketplace.” The US firm added in a separate statement:

“A team focused on product development and integrated systems production will continue to operate in Madison, Wisconsin. In the near future, volume production programs will leverage the Gooch & Housego (Boston) manufacturing infrastructure.

“Points of contact for current customers and vendors remain unchanged. We look forward to continuing to serve you with the same professional approach and the added advantages of the resources of a much larger organization. It is our goal to make this transition as seamless as possible for our partners. Our simple message is that you should expect business as usual.”

G&H stock: on the up
G&H is paying $1.3 million in cash for the Alfalight business. The Kent Periscopes will cost up to £9.5 million, split into an initial £7 million cash fee followed by a performance-related £2.5 million cash-and-shares consideration over the next two years.