Oxford Finance cash will be allocated to growing sales of ‘Neuroblate’ system for treating brain lesions. 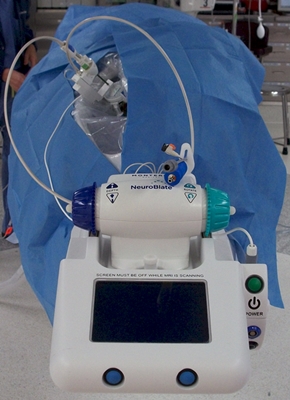 Virginia-based Oxford Finance, which specializes in loans to life sciences and healthcare companies, is providing the capital to Monteris, whose CFO Jim Erickson said:

"Oxford has been a close partner to Monteris during our early-stage development activities, and we welcome the opportunity to continue that partnership. This additional venture debt capital gives us the flexibility to accelerate the adoption of our NeuroBlate system as a minimally invasive surgical alternative for neurosurgeons and their patients."

Based around a 1064 nm Nd: YAG laser, the company’s “NeuroBlate” thermal therapy system is guided by MRI visualization. It can be used to ablate, necrotize or coagulate soft tissue, and the latest version of the technology received US Food & Drug Administration (FDA) approval in April 2013.

Monteris says the system has been used in more than 800 patients procedures since that approval, across 35 systems installed in North America. An early-stage study published in 2013 indicated that the approach may increase the survival time of patients suffering from otherwise inoperable tumors called recurrent glioablastomas.

Now a 1000-patient clinical trial of a robotic treatment system featuring NeuroBlate to treat primary and metastatic brain tumors is scheduled for completion in 2020, with hospitals in San Diego, Connecticut, Florida, Missouri, and elsewhere involved.

Epilepsy feasibility study
It’s not only cancer that the Monteris technology is being developed for. In April this year, the company announced that the FDA had approved evaluation studies on the same kit for treating epilepsy.

A multi-center trial across up to eight sites in the US, treating around 30 patients suffering from epilepsy with Neuroblate, is now planned.

The thinking is that while traditional open brain surgery is too invasive to be considered as an option for what is termed “refractory” epilepsy – where drugs are unable to control seizures in patients – the minimally invasive nature of laser interstitial thermal therapy could be provide an alternative option.

US authorities estimate that around a third of the 2.9 million people in the US diagnosed with epilepsy continue to experience seizures, despite drug therapy intended to control the condition.

Monteris says that the feasibility study should begin before the end of this year, with the enrolled patients followed for two years after treatment. Results can be expected in around four years from now.

At the time of FDA approval, the company’s VP of clinical affairs Daryle Petersen said: “Refractory epilepsy represents a significant unmet medical need. The study will help increase our understanding of the potential benefit of the Neuroblate system may have on the quality of life of patients living with this serious and debilitating disease.”