Universal Display gets into the blue with OLED assets from BASF 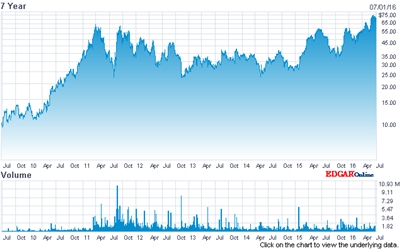 UDC paid $87 million in cash for more than 500 granted or pending patents, developed by BASF over the course of 15 years’ research and development work. They largely relate to phosphorescent materials, with a focus on blue emitters.

Despite being one of the major players in OLED chemistry development and organic electronic materials more widely, BASF quietly decided to stop work on the emerging technology at the end of last year. The UDC deal does not involve any BASF employees, and those who were working in the OLED area have been shifted to other projects at the chemicals firm.

Felix Goerth, director of organic electronics at BASF New Business, said in a statement: “We believe our IP and know-how fits perfectly into UDC’s patent portfolio and competencies and that UDC will be able to generate the most value for the OLED industry out of these combined phosphorescent technologies.”

UDC’s CEO Steve Abramson said that the deal should help the US company develop an all-phosphorescent emissive stack of organic semiconductors, adding: “We believe that this acquisition will help further these research efforts, principally in the development of commercial blue emissive systems.”

Apple rumors; LG Display expansion
Already in possession of a major licensing agreement with key OLED display maker Samsung, UDC is expected to be a significant beneficiary of Apple’s rumored adoption of the technology in a future version of its iPhone.

That is partly the reasoning behind UDC’s current Nasdaq market capitalization in excess of $3 billion - on annual sales of only around $220 million this year and modest profitability.

Celebrating the firm’s 20th anniversary on the Nasdaq in May this year, Abramson hinted at those Apple stories, telling investors that now was an “amazing time” for OLED technology, as commercial and developmental activity proliferates in both display and lighting applications. Orders for excimer lasers used in OLED production have also spiked in recent months, adding fuel to the Apple rumors.

“The OLED landscape continues to expand from new product launches, capacity announcements, equipment bookings, a robust pipeline of OEM design activities, including much chatter about additional OEMs adopting OLED technology for their smartphones,” said the CEO, also referring to huge investments in both OLED TV production and lighting technologies by LG Display and a deal with high-end consumer electronics firm Bang & Olufsen.

The BASF deal was UDC’s second in the space of a week, after the firm also agreed to pay $36 million in cash for Delaware-based Adesis, a contract research firm that specializes in organic and organometallic chemical synthesis and employs 43 people.

Markets appeared to react positively to both of the acquisitions, with UDC’s stock price rising to an all-time high of $69.62 in early trading on July 1. It means that the company has risen in value by ten times since February 2009 (see chart above).