Edinburgh conference will give updates on practice, research and commercial potential of photonics and sensing to the military and security services. 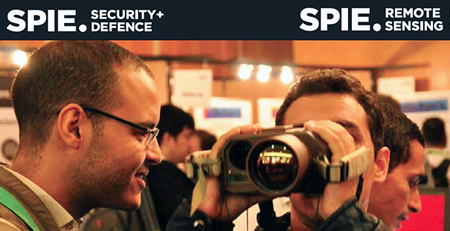 Conferences will be collocated in Edinburgh September 26-29th.

Defense, security, remote sensing and associated photonics technologies will be the subjects of a wide range of discussions, conferences and an exhibition to be held in Edinburgh, in conjunction with the forums SPIE Remote Sensing and SPIE Security and Defense. A day-long set of talks focused on “Security+Defense” will be collocated with the Remote Sensing event.

The Security+Defense event, which features a program of significant photonics experts, will also take place at Edinburgh International Conference Centre, UK, 26-29 September 2016 and the exhibition, 27-28 September 2016.

Among the notable speakers over the three-day festival of defense-related optical applications and developments will be Professor Sir David Payne (ORC, Southampton), Professor Sir Peter Knight (Imperial College London) and Air Chief Marshal Sir Brian Burridge, who, now with a 10-year industrial career behind him, is also Senior VP UK Corporate, at Leonardo-Finmeccanica and chair of the UK's joint government-industry Defence Solutions Centre.

In advance of the event, optics.org interviewed Sir Brian Burridge, who also has served in the Royal Air Force for over 35 years, leaving as the commander-in-Chief of Strike Command. His keynote talk will identify barriers to moving new information technology from the laboratory into the hands of the warfighter, and he is offering proposals for change.

He said, "A critical requirement of the military working in theater is known as ISR, which stands for information, surveillance and reconnaissance,This relies significantly on photonics systems as the underpinning technology. We need good ISR to make strategic decisions and to enable effective discrimination in accordance with international humanitarian law when using weapons in combat. This is because in the asymmetric situations typical of today’s warfare there often isn’t much difference in appearance between combatants and civilians.

"Effective photonics systems help the military to convert visual information to useful data and ultimately to knowledge and wisdom by which to assist in decision-making.”

Considering the photonics technology areas of particular interest and where further development was still required, Sir Brian identified autonomous systems (UAVs / “drones”) carrying information gathering technologies. “But we still have yet to see a system that is autonomous and discriminatory without requiring human intervention.”

He added, “We have seen much progress with liquid-cooled IR detectors. But the combination of IR and radar technologies is proving increasingly beneficial for actions such as detecting and retaining contact with fleeting targets. Ultimately, we are seeking a single integrated system to scan across the full electromagnetic spectrum while still offering a combination of sensitivity and range. A big ask!”

Sir Brian also described how lessons learned from earlier combat situations can be helpful for developing next generations of photonics-based military equipment: “For example, we learned from both Iraq and Afghanistan that providing base security in remote areas against threats such as insurgents placing Katyusha rockets within range. Ground-based IR detection systems did much to help us there.”

From his own personal experience as a pilot in Gulf War I in the early 1990s, Sir Brian observed that IR based detection and targeting technology had been significantly improved from the “blob” images in earlier “pods” (on Tornado aircraft) for detection and locking-on of targets in both the 1991 Gulf War and the 2003 Iraq War, to the more detailed images achieved a decade later by refined pod generations deployed on operations in Libya.

”In Gulf War I we had to become experts in blob-ology as we received very blurred and indistinct images. But the latest generation of detectors give much clearer images and are outstanding in their discrimination,” he said.