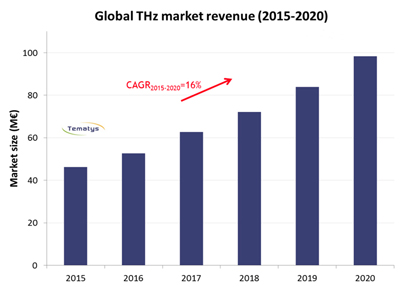 On the up: Terahertz system sales through 2020.

In 2013, market analyst Tematys released its terahertz systems report on market and technology trends covering the electromagnetic spectrum from 200GHz to 10THz. Since then, terahertz technologies have been deployed in a variety of new applications beyond their core scientific market. These include non-destructive testing in industry, defense and security, and biomedical. There is now a new report from the France-based company, addressing and updating the latest sales trends in this rapidly-growing marketplace.

The whole terahertz systems market is expected to grow from almost €50 million p.a. in 2015 to €100 million p.a. by 2020, with a CAGR, 2015-2020, of 16%. Within the whole, the industrial NDT market is seen as the major driver of terahertz market growth, says Tematys. The industrial NDT market accounted for almost half (46%) of the total terahertz systems market revenue in 2015 and this sector alone is expected to grow at a CAGR of 19% through 2020.

Report authors Clemetine Bouyé and Sarah Taoudi comment, “The better understanding of terahertz technologies’ abilities together with the evolution of the application markets will drive the growth of this market. The report analyzes key markets such as industrial non-destructive testing, defense and security, telecommunications and biomedical, to identify those where the demand for terahertz methods is most mature.

“Thanks to recent ongoing feasibility studies, manufacturers and end-users have now gained a much deeper knowledge about the abilities and the limitations of the different terahertz-based systems and identified the three main functions that these technologies address three main applications areas,” the authors added. The techniques are as follow and are detailed in the graphic below. 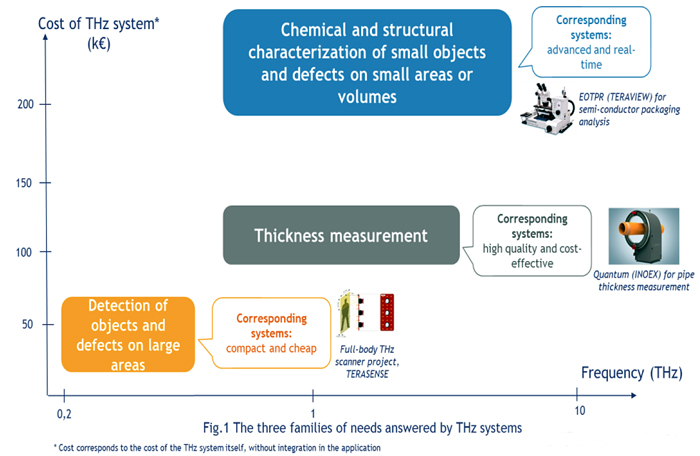 The report, which has a multi-user price of €4990, covers the following objectives: describing applications that will drive the terahertz market growth and a market analysis of these applications; detailing the terhertz components and systems commercially available and provide an insight on future developments; to explain which kinds of systems answers which needs; and providing market forecasts by application and insights on investment opportunities.

The terahertz products and systems now available are designed to meet the three principal applications of terahertz. The new report explains that each function leads to specific "families" of systems with distinct requirements in terms of performance and cost:

3. Characterization: High resolution and high reliability sensing systems for real-time chemical and structural characterization of the object of interest. An example of systems under development here is real-time TDS.

For each product family, the report studies the innovative systems being developed to meet end-users’ needs. It also details current and future trends in component developments as well as perspective on likely/possible cost reductions. 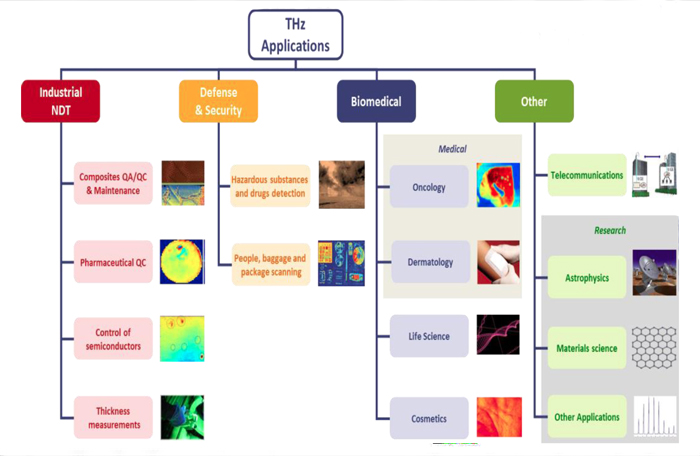 TeraView, the pioneer and leader in terahertz technology and solutions, has announced the introduction of a fully automated integrated circuit package inspection system, the EOTPR 5000. Making its debut at SEMICON West 2016, last week. The EOTPR 5000 is a fully automated advanced IC package inspection system that utilizes TeraView’s proprietary EOTPR terahertz technology to detect weak or marginal interconnect quality in high volume manufacturing environments, which the company claims, "no other technology can detect today".

Martin Igarashi, VP of TeraView’s Semiconductor Business, commented, “Previously, IC manufacturers did not have 100% confidence in a golden device or known good device. With the EOTPR 5000, combined with other existing inspection methods, IC manufacturers now can be certain that their devices are reliable. We are starting beta testing of the EOTPR 5000 at a major IC manufacturer’s site in Asia to demonstrate that this product meets the rigor of the 24x7 IC manufacturing environments."