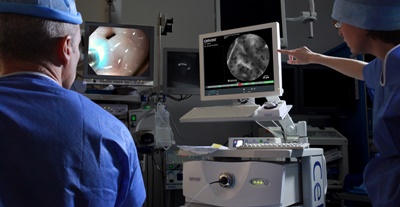 The company said that it issued nearly 3 million new ordinary shares for the benefit of a small number of European institutional healthcare investors, at a discount to the firm’s current stock price on the Euronext exchange.

CEO and founder Sacha Loiseau said in a company announcement: “The additional capital raised will allow Mauna Kea to capitalize on the opportunity for Cellvizio to become the leading option for real-time cellular and molecular diagnosis of disease, and an integral element for a broad range of surgical interventions.”

More specifically, the money is set to support product development, clinical trials and regulatory approval work, as well as an algorithmic cloud-based computing system to help interpret images captured by the Cellvizio hardware.

Profit challenge
Although the optical biopsy technology has shown promise in a number of clinical trials for diagnosing cancer and aiding surgeons, Mauna Kea has struggled to turn that promise into a profitable business.

Last year, Loiseau and colleagues changed their strategy from direct sales and marketing to concentrate on licensing deals with larger healthcare equipment companies, signing agreements with the likes of FujiFilm China and US-based Cook Medical.

According to the CEO, that switch is now having a positive impact on the company’s finances. Mauna Kea has reported a much-reduced rate of cash burn in the first half of 2016.

At €2.5 million, quarterly sales for the period ending June 30 were also up 16 per cent on the prior year, after the company shipped 22 Cellvizio systems compared with only 15 a year ago. Sales of consumable probes also rose strongly.

“The year-over-year and sequential increases in consumable probe sales, and particularly the re-order rate, reflect increased utilization of the Cellvizio systems along with growth of the installed base,” reported the firm, with Loiseau reflecting:

“Almost 12 months ago, Mauna Kea launched a strategy shift to both increase the global reach of Cellvizio and improve Mauna Kea’s financial performance.

“Today’s results represent an important and successful step towards the execution of the company’s partnership strategy, and additional evidence that worldwide clinical adoption of Cellvizio is increasing.”

Cash burn down but stock drops further
After posting pre-tax losses of €14 million in 2014 and €12.6 million in 2015, it became clear that a change in approach was needed to stem the outflow of cash.

The Paris company says that its cash burn is down by nearly half since it made the strategic changes, while it had €5.7 million in cash on its balance sheet at the end of June – shortly before the new equity financing.

As well as the deals with Cook Medical and FujiFilm China, Mauna Kea is collaborating with Edinburgh Molecular Imaging on diagnosis of lung and pancreatic cancers, and with the German engineering giant Siemens on multiple trials including brain and spinal tumor identification.

Despite the positive noises from the company, Mauna Kea’s stock dropped in value more than 10 per cent in early trading on the Euronext exchange after the latest quarterly results were issued.