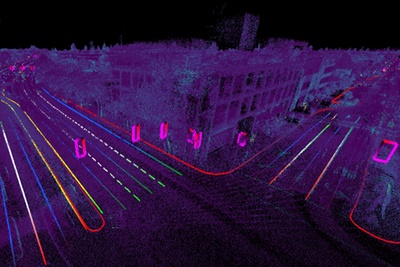 Together with Motus Ventures, Wicklow Capital, StartX Stanford and AME Cloud Ventures – the latter set up by Yahoo co-founder Jerry Yang – Ford has invested $6.6 million in the Berkeley, California, firm.

Civil Maps is developing lidar mapping software that it is claimed will make it possible for fully autonomous vehicles to drive anywhere smoothly and safely, by continuously creating maps of their immediate surroundings, rather than relying on GPS data or images.

While self-driving cars are among the hottest topics in technology, and Ford’s CEO Mark Fields has gone on record saying that he believes such vehicles could be on the road by 2019, the emerging field suffered a high-profile setback recently after crashes involving semi-autonomous Tesla cars.

What Civil Maps’ approach promises is to generate vastly more “actionable” data for those vehicles, based on real-time interpretation of their immediate surroundings.

Jim DiSanto, managing director of Motus Ventures, which led the seed funding round, said: “By creating and managing live semantic maps of all the roads in America, the company is providing a technology essential for the leap to fully autonomous vehicles that can transform the future of transportation.”

‘A totally new kind of map’
According to Civil Maps, its artificial intelligence software aggregates raw 3D data from high-resolution lidar equipment, as well as cameras and other sensors used by autonomous vehicles, and turns that information into machine-readable maps.

“The information is vastly more actionable information than today’s mapping systems and requires a fraction of the data storage and transmission for existing technologies,” it claims.

The relatively light data footprint means that it is possible to transmit spatial information cover cellular networks easily, meaning that road data can be shared and crowd-sourced in real time.

That would represent a major improvement over what are currently much more cumbersome processes that require human interaction. As a result, the company says its approach can quickly generate and maintain maps that give fully autonomous vehicles the comprehensive and precise knowledge to operate safely and smoothly on all roads.

“Civil Maps’ scalable map generation process enables fully autonomous vehicles to drive like humans do – identifying on-road and off-road features even when they might be missing, deteriorated or hidden from view and letting a car know what it can expect along its route.

“We are honored to work with Ford and the rest of our investor team to pave the way for fully autonomous vehicles at continental scale.”

Quanergy’s lidar hardware
Among the company’s other partners are communications giant Verizon, Berkeley and Stanford universities, and the US Department of Energy.

“Sensors form the connection between the cyber world and our physical surroundings,” states the VC firm. “Motus sees new sensor technology, along with associated controlling software, and cloud analytics, as key areas of innovation and investment.”

Among Motus’ other portfolio companies is Quanergy Systems, which makes lidar hardware for autonomous vehicles and advanced driver assistance. The Sunnyvale firm has already worked closely with Mercedes-Benz, showing off a compact 3D lidar sensor on board a car at this year’s Consumer Electronics Show in Las Vegas.

Quanergy, which is also targeting related sectors including drones and robotics, already claims to have reduced the cost and size of solid-state lidar equipment to hand-held systems at just $250, with further reductions to key-fob form factors anticipated.

Earlier this year the company announced that it would begin mass production of its 100-gram, 1 x 1.5-inch “S3-Qi” model lidar in early 2017.