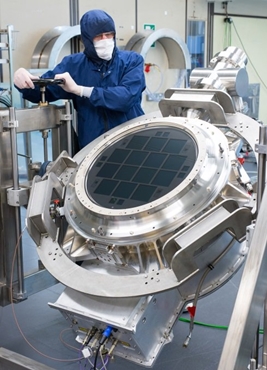 CCD and CMOS sensor developer e2v Technologies says that its “CryoCam” 1.2 gigapixel camera subsystem has passed a critical milestone in advance of integration with a major telescope project in Spain.

The Javalambre Physics of the Accelerating Universe Astrophysical Survey (J-PAS) project, a collaboration between Brazilian and Spanish scientists, has completed a factory acceptance test on the camera, which is now set for delivery.

Once installed on the 2.5 meter-diameter telescope in the Aragon region of Spain, the CryoCam will be used in a five-year survey of an anticipated 14 million galaxies across the northern sky. Astrophysicists will use the data collected on red-shifted light from those galaxies to build a high-fidelity 3D map of the universe and a detailed study of so-called "dark energy".

Flat focal plane
UK-headquartered e2v says that one of the key features of the giant CCD array is its exceptionally flat focal plane. The full array comprises 14 individual sensors, each comprising 9000 x 9000 pixels.

According to Mark Robbins from the company, who gave a presentation about CryoCam’s development at the SPIE Astronomical Telescopes and Instrumentation conference in Edinburgh earlier this week, the 27 µm peak-to-valley flatness far exceeded expectations, with the telescope consortium’s representatives “delighted” at the characterization result.

Robbins also highlighted excellent test results confirming low noise and cross-talk. That is critical because the wide-field J-PAS telescope, which boasts a 3° field of view, will detect light across an unprecedented 56 narrow-band filters in the optical region.

In a release from e2v Renato Dupke, principal investigator for the Brazilian side of J-PAS at the Observatório Nacional, said: “We are very happy with the development of e2v’s 1.2 gigapixel cryogenic CCD camera for the J-PAS project. The subsystem is already achieving in-factory performances significantly beyond our original expectations.

“Tests are already suggesting an equivalent performance when the subsystem is fully integrated at the telescope. This will have a giant impact on a wide variety of fields in astronomy, in particular on the nature of dark energy.”

Robbins also pointed out at the end of his presentation that the project had demonstrated that a commercial partner could take on the development of a high-performance camera sub-system for a large telescope.

That appears significant at a time when many working in the field of large ground- and space-based telescopes are looking to the private sector to provide more of the key technologies required.

“Turning the battleship”
Also speaking in Edinburgh, Charlie Atkinson from Northrop Grumman Aerospace Systems (NGAS) told delegates that the current “paradigm” in large space telescope development was unsustainable, likening the need for a new way of thinking about such missions to “turning a battleship”.

Using calculations developed by NASA, Atkinson – who was deputizing for Jon Arenberg, chief systems engineer for the James Webb Space Telescope (JWST) – said that a next-generation follow-up to the $8.7 billion JWST would likely cost half as much again and take nearly 25 years to complete.

Those calculations rely heavily on the size of the telescope’s primary mirror, the wavelengths being detected and the operating temperature, and Atkinson pointed out that a subsequent step-up would require more than five times the JWST budget, and take some 87 years to build.

Part of the reason is that despite the undoubtedly cutting-edge nature of the technology involved, large telescope development is essentially an artisanal process – demanding bespoke components and systems, with little to no re-use of hardware or personnel.

System first; telescope design second?
One key issue is that, at present, systems must conform to individual telescope designs. One significant change that could make future development more sustainable would be to reverse that approach and start out with a system design, into which a new telescope would have to fit.

But another part of the solution could be the greater adoption of industrialized technologies that have been developed by the likes of e2v for multiple applications, as well as providing for a greater element of post-launch service - at the expense of the currently very extensive but costly pre-launch testing regime.

Atkinson pointed out that the potential for this more “evolutionary” approach to space systems was evidenced in the Hubble Space Telescope mission, where it proved possible to correct errors in HST’s original optics with a subsequent service mission.

“We plan to provide long-term post-delivery services throughout the camera’s entire life such as optimisation, maintenance and high-priority support,” he said. “We are looking forward to seeing outstanding scientific discoveries enabled by J-PAS and the e2v team.”

The company says that it will deliver the CryoCam to J-PAS this summer, with integration in the autumn. The telescope should then be fully operational by early 2017. "This is a big achievement for [e2v], as we're now offering a complete detection subsystem," the firm added.